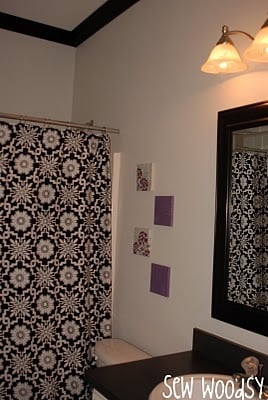 *Remember this teaser picture back from the beginning of October? When I wrote about my new $2 bathroom art… Now you finally get to see the tiny bathroom reveal!
This project was finished at the end of September, but I never had time to post pictures of this mini makeover project. We called it a mini-makeover because we took down the builder grade mirror, light fixture, and medicine cabinet, and added our own touch to the bathroom. We also decided to be bold and not only put crown molding in our guest bathroom, but paint it black! I am so glad we chose to go with black crown molding! It gives such an amazing and elegant touch to this bathroom. We don’t have much left to do on this bathroom… we just want to upgrade the laminate countertop with granite, but that won’t happen until we get our kitchen countertop done! I hope you will enjoy looking at all the pictures below on how our adventures of black crown molding went.
Unfortunately, Mr. Woodsy does not have time to write up a tutorial on installing crown-molding. If you asked him he would tell you that the “mrs” is being a slave driver about this craft room project (it has to get done before Thanksgiving (it’s been going on since April))! Mr. Woodsy learned how to put in crown molding from his dad. {His dad is very handy as well!} He helped his dad put in crown molding all through there home, and we could say is the inspiration of why we choose to place crown molding in our bathroom! {Eventually, we will have crown molding throughout the whole house, for now we have it in the three smallest rooms of our home; guest bathroom, laundry room, and soon-to-be craft room}.
Let me preface… the crown molding was all painted white at first, and then Mr. Woodsy stacked our painted white high gloss crown molding. DON’T EVER STACK CROWN MOLDING AFTER IT HAS BEEN PAINTED NO MATTER HOW LONG THE PAINT HAS “DRIED” FOR. {If anything I hope everyone can learn from a BIG mistake}. We unfortunately, had to learn the hard way, and large splotches of paint ripped off the boards thus causing for double, no wait triple the work! Mr. Woodsy had to sand them down, prime them, and then painted the high gloss (twice with this process because he wasn’t happy the first time) thus even after the second time of hand sanding the boards you could still see where the paint had ripped off. Luckily on his second go around with hand sanding and painting that’s when we decided to paint two boards (maybe it was three) black for the bathroom. We used Behr high gloss black paint. 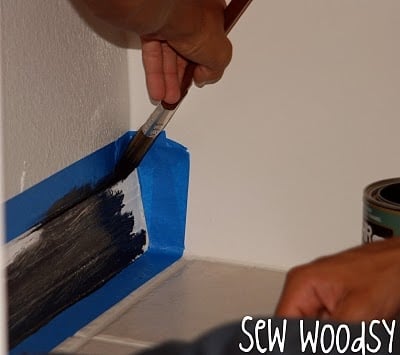 {I would say we, but} Mr. Woodsy taped up the bottom base boards and painted them black! This was the start of the black molding. I was very nervous about this, but in the end it came out great! {Side note: we kept the door frame white… we felt that a black doorframe might be too much.} 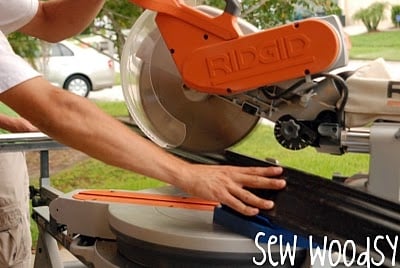 Mr. Woodsy cutting the crown molding (incorrectly–read below). He bought what he thought was going to be the trick to his crown molding dilemma this “amazing” tool (blue thing under the black crown molding) that helps with angles… no not so much it stunk and almost ruined one board of crown molding. Needless to say this was brought back to the “depot” the very next day! 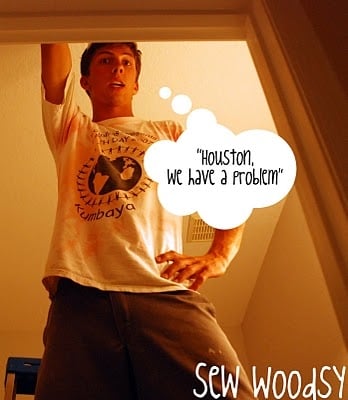 As you can tell from the caption… “we have a problem”. He cut the angles incorrectly. This is a common problem in cutting crown molding. You have got to have everything measured out perfect! One brain fart and you could have BIG problems! Because we literally had just enough crown molding to complete our three smallest rooms in the house (and just enough painted for the bathroom) he was forced to cut the piece in half to make it work. Not what he wanted to do… he wanted it to be one solid piece, but I refused to spend any more money or time on this crown molding project. At the end of the day when you look up at it you have to look very closely to see that it’s two pieces.
{Not the end of the world in my book!}
If you want to read a great tutorial on crown molding, visit This Old House or visit youTube that’s where Mr. Woodsy picks up a lot of great ideas, tips, and tricks! 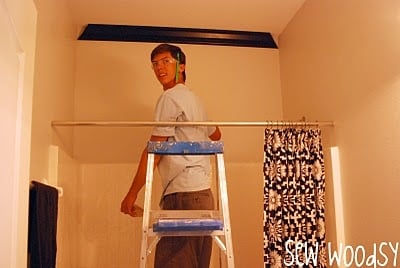 After he messed up the first cut he made the second cut correct and decided to start on that side first! Because this was such a small space he did not need any extra sets of hands to help put up the crown molding. Thus after this piece he had to close the bathroom door so he could finish his work (not allowing me to take any more pictures).
*For larger spaces you need at least an extra person to hold the molding in place. 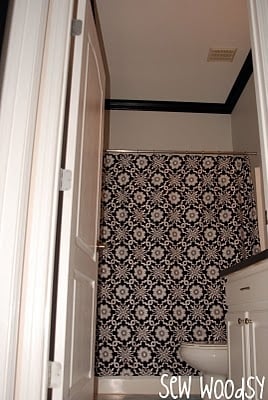 Here is the finished product! Doesn’t it look amazing?!?!?!
*I purchased the shower curtain over 3 years ago at K-Mart for $20 & hardware for cabinet $5 at Home Depot. 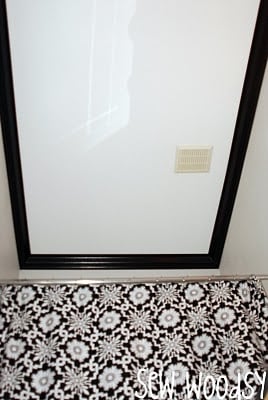 Here is a view of me laying on the ground taking a picture of the ceiling.
The walls were painted a light grey, and we kept the ceiling white. 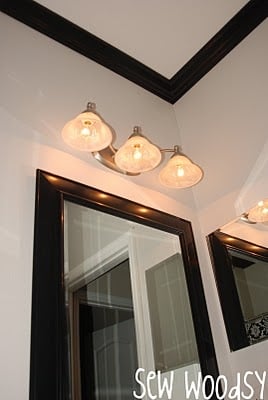 This gives you an idea of all of our upgrades in one photo! We purchased the framed mirror ($25) at Home Goods, the new bevelled medicine cabinet ($30) and Crown Molding (5 pack for $90+) at Home Depot, the light fixture was given to us for free (thanks to Mr. Woodsy’s parents). This kind of gives you an idea of our mini make-over. For about $150 we have a brand new look and elegant feel!
We entered the CSI Challenge: