Quite a few months back, after almost a year of searching, Mr. Woodsy and I found the “perfect” dressers via Craigslist. These perfect dressers sat in our garage for a month until we finally decided to start sanding. 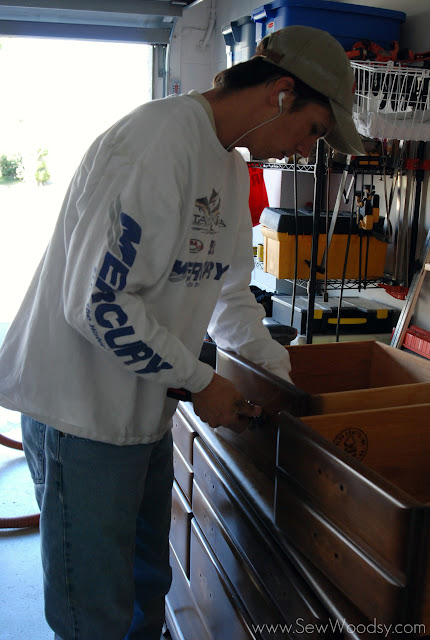 Mr. Woodsy started by removing all of the hardware from the dressers. 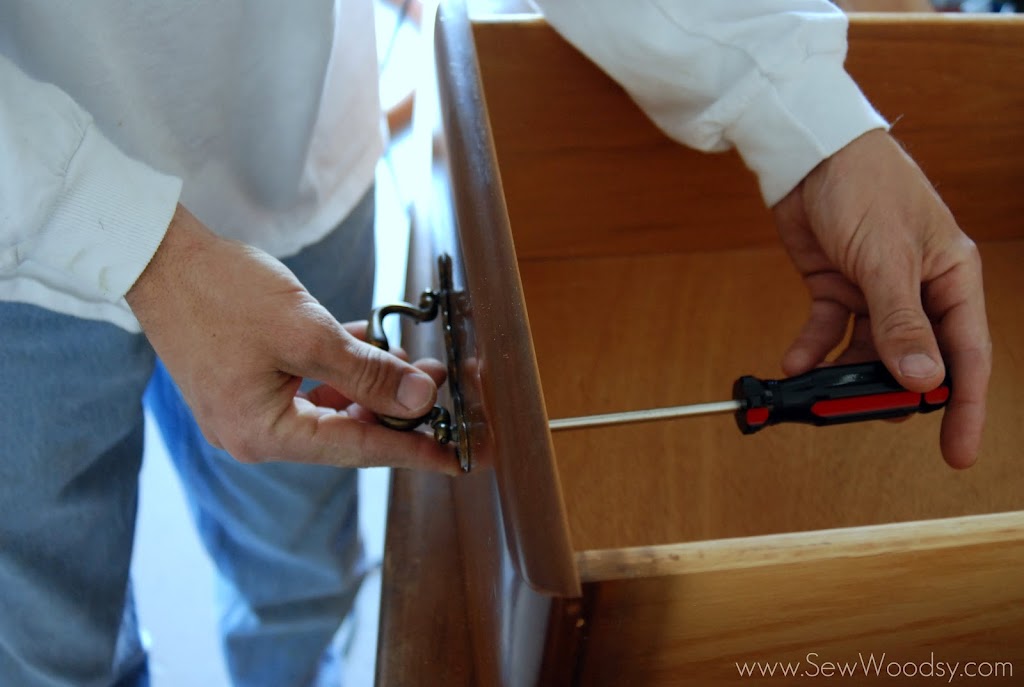 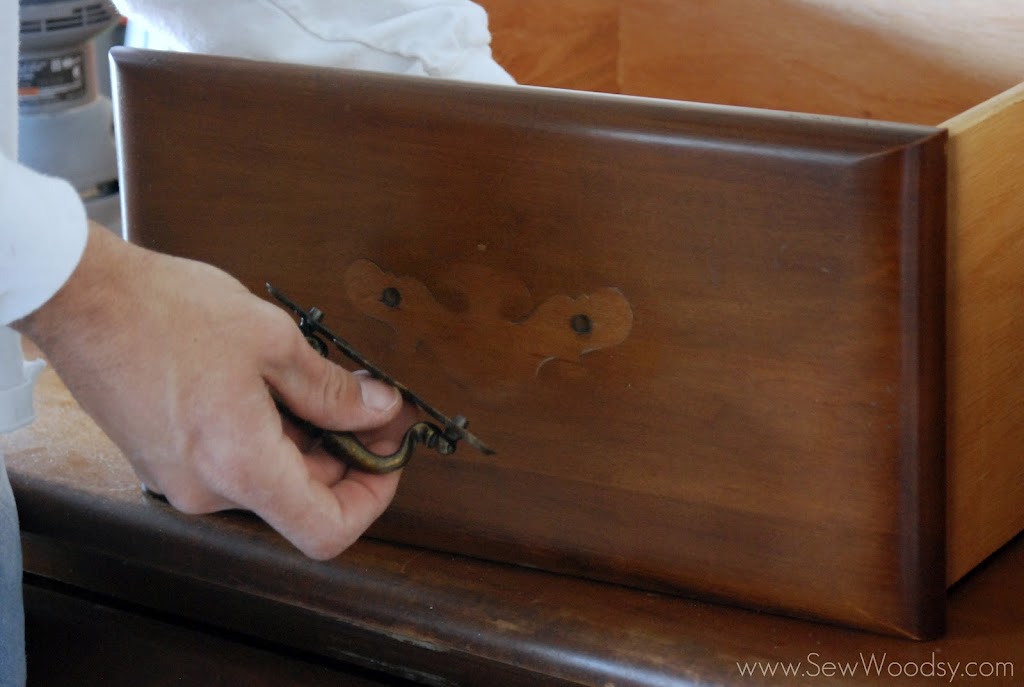 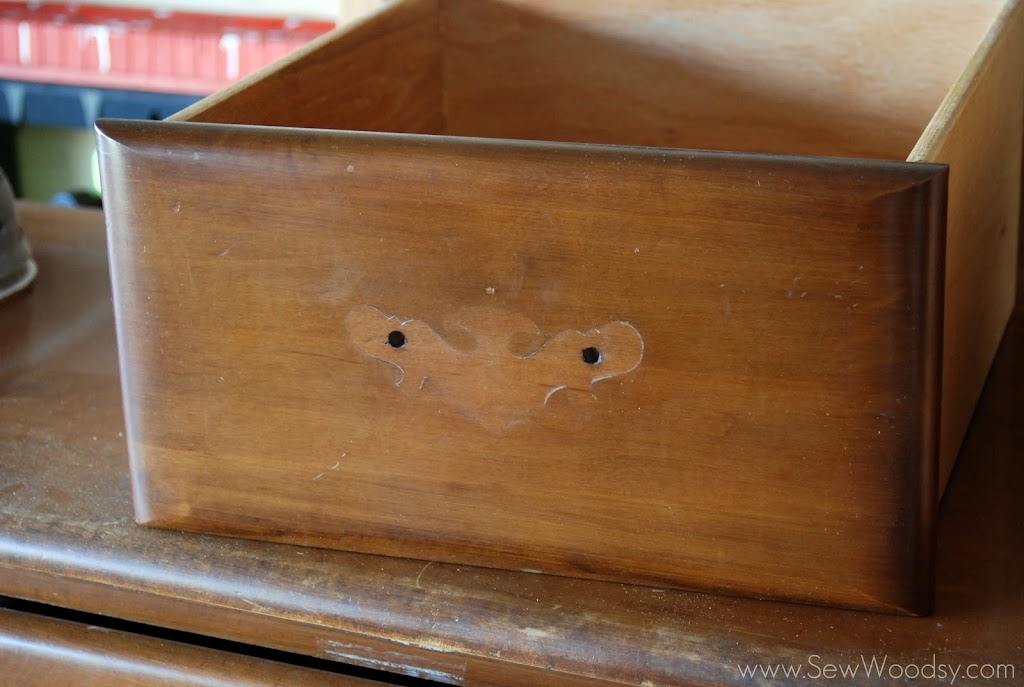 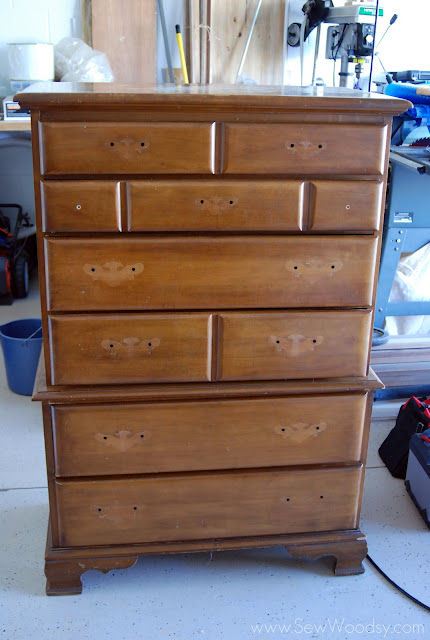 All hardware removed–the dressers were officially ready to be sanded! 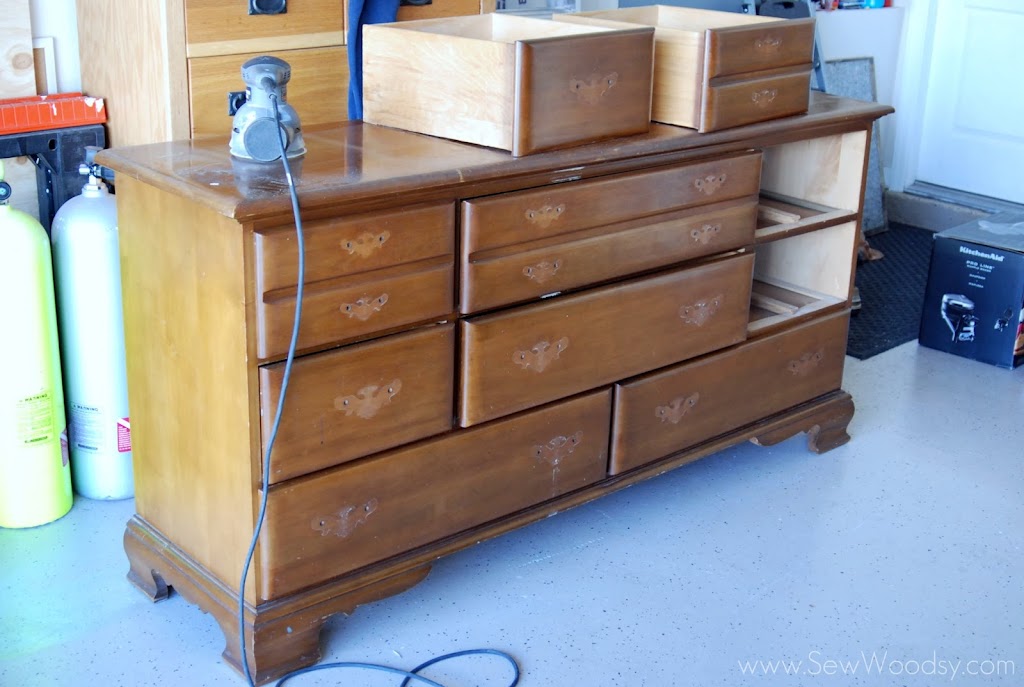 And because I’m getting fancy on y’all– here is an animated photo of Mr. Woodsy sanding the long dresser. He ended up taking a belt sander to the top of the dressers since we needed the tops as smooth as possible since we want to stain the tops a beautiful mahogany color. That helped speed up time immensely. I wish I would have taken photos. It was literally three passes and he was done sanding the tops! 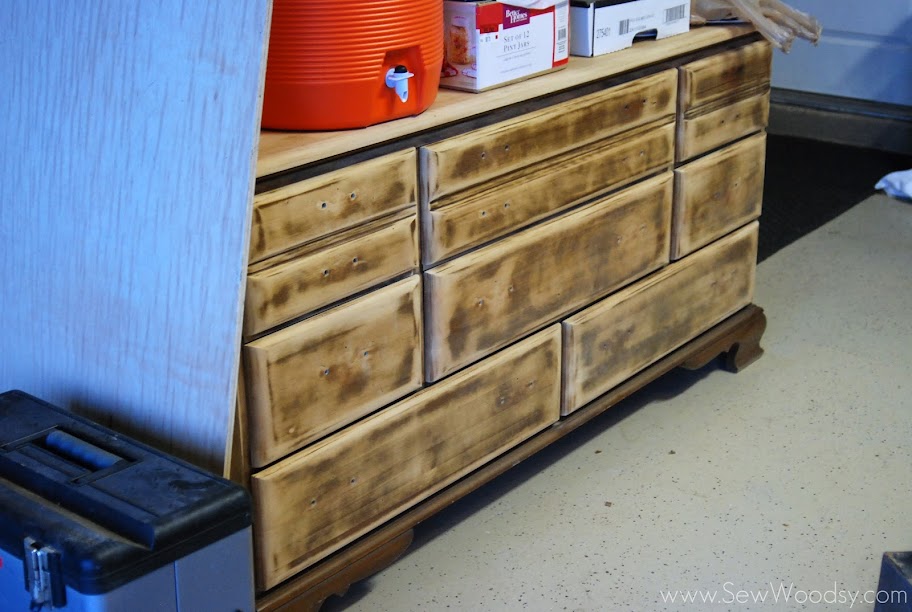 Mr. Woodsy sanded all of the long dresser in just about one day. And then, it became a place to store the world in our garage. 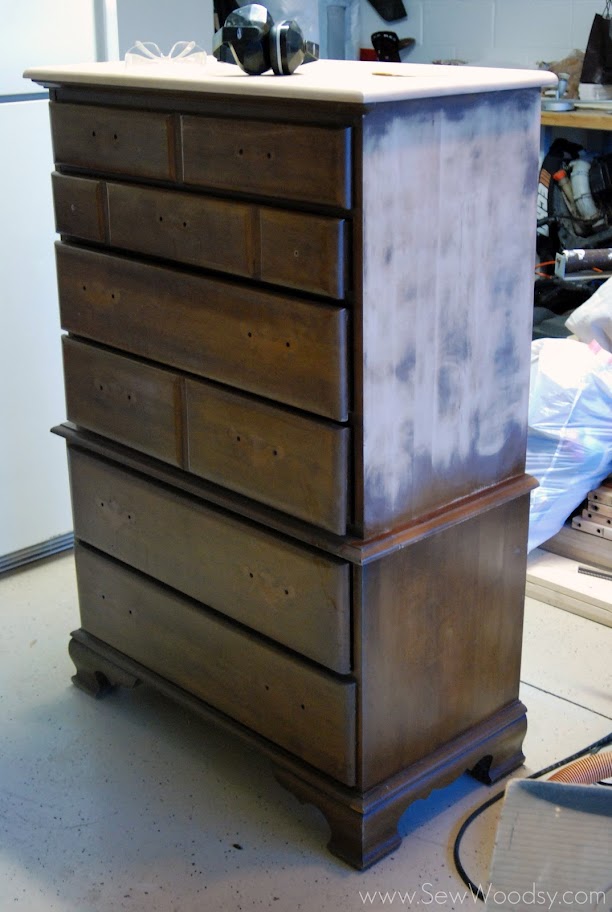 Later that week, Mr. Woodsy showed me how to use the orbital sander since I wanted to contribute and get the dressers done. That little sanding on the side was all me! The main thing Mr. W stressed to me was not to put pressure on the machine. Lightly guide the sander in even strokes. 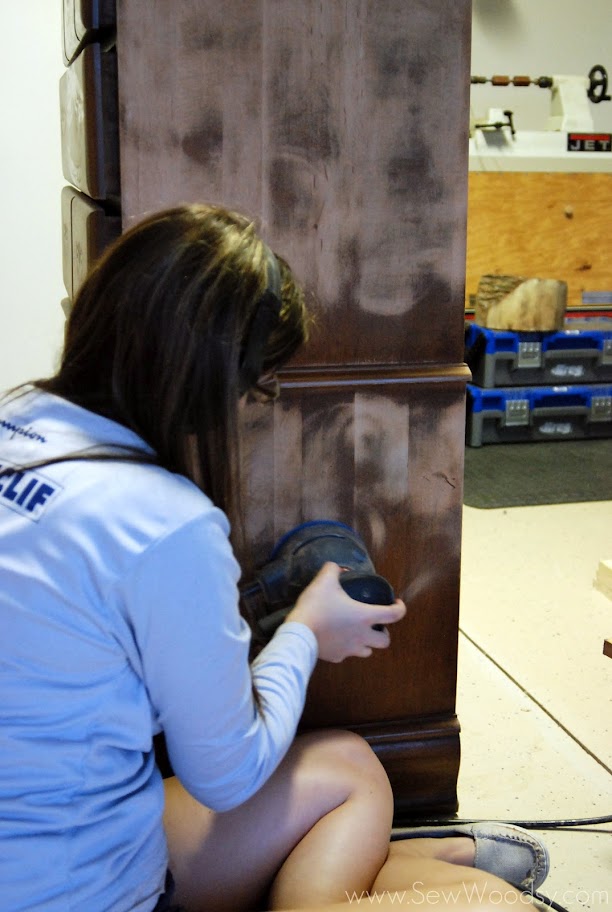 After Mr. Woodsy showed me how to use the orbital sander I was determined to sand the tall dresser on my own. The weekend I tackled this project just so happened to be Mr. Woodsy’s birthday. We had tons of plans made, but little did we realize that all of our plans were about to change when Mr. Woodsy received a ticket to the NBA All-Start Games weekend here in town. Yes, if you follow sports–we started working on these dressers back in February!!! So Mr. W left for the first of 3 games that Friday and I was at home all by myself. What was a girl to do with her time? Unfortunately, for me–our next door neighbors had a bounce house and all I could hear were kids screaming throughout our house, so after attempting to relax on the couch I decided to put the ear protection on and sand in the garage. I would be productive and I wouldn’t have to hear the screaming kids next door! 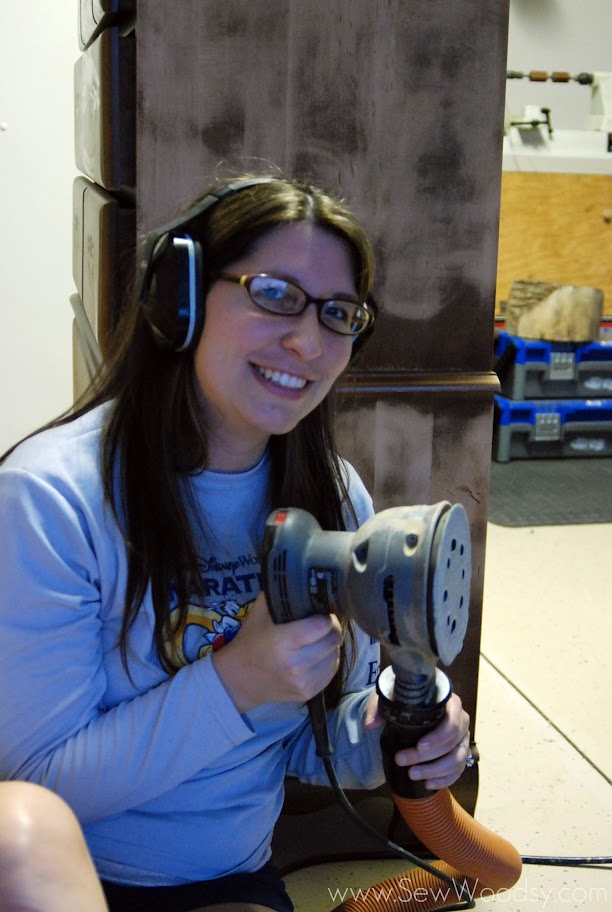 As much as I wanted to attend the Allstar game–I was happy that I was being productive and getting our dressers sanded! I set up the tripod and stopped every so often to attempt to take a timed photo. 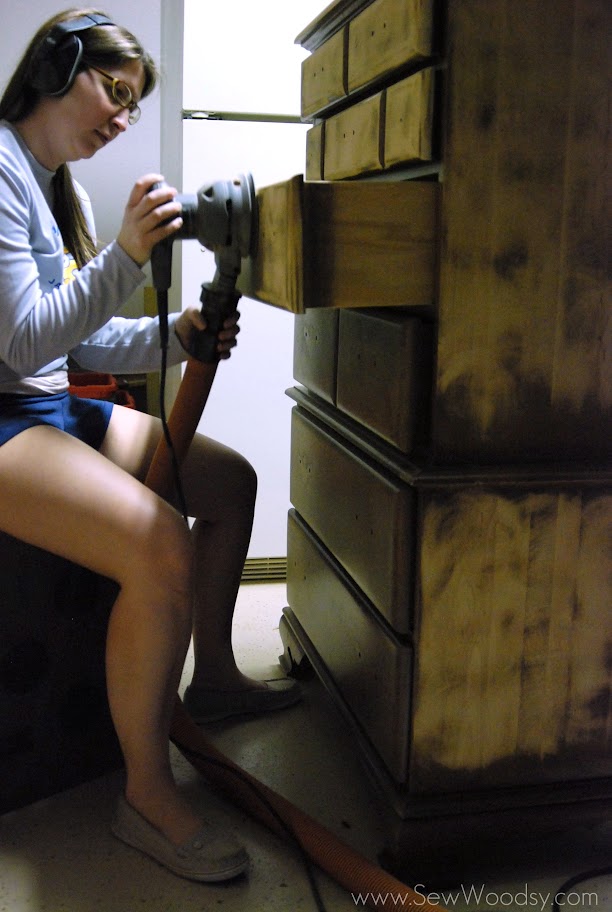 I finished sanding the tall dresser all in one evening, and I very much surprised and made Mr. Woodsy very proud when I sent him a text with the sanded dresser. I’m proud of myself–doing something I never thought in a million years I would do–pick up a tool.

Stay tuned for our dresser transformation.