Last weekend, we had a “staycation” and spent the weekend at Walt Disney World. I was attending a food blog conference for my food blog; Katie’s Cucina and I was able to bring the family along. We spent 2 nights at The Grand Floridian Hotel and 3 days at the parks. Although we live in Orlando, we have yet to take Ryder to the Magic Kingdom. He’s been to Epcot (Food & Wine Fest) and to Hollywood studios to see the Osborne Family Christmas Lights. Jon and I were both very excited to bring him to Magic Kingdom. Although he’s only 11 months we knew he would love it. And boy were we right. Today we are sharing a few tips that we learned as we navigated through the Magic Kingdom with our 11 month old (and our friends joined us with their almost 2 year old). 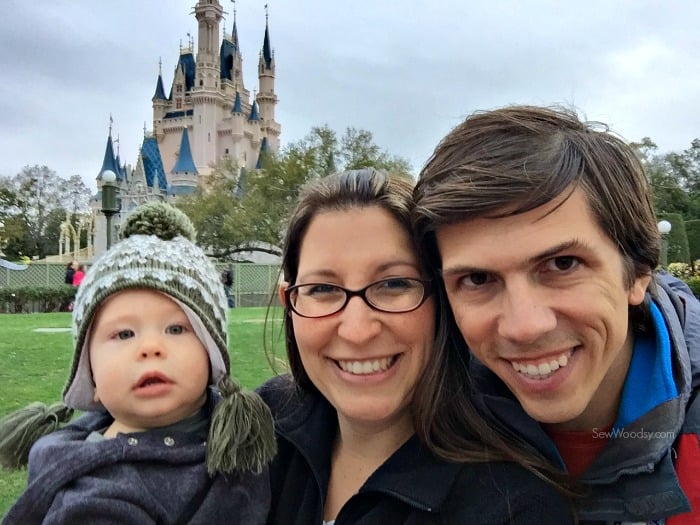 1. Pre-book fast passes – You can book up to 3 fast passes at one time. You can only book them once every hour and you can rebook more fast passes during the same day after you’ve used up your first 3. I suggest you book the top 3 rides you really want to ride on. Rides that tend to have long waits would be Peter Pan, Dumbo, It’s A Small World, The Adventures of Winnie the Pooh. Those are just a few rides that you might want to consider using a fast pass on.

2. Download the My Disney Experience app – you can book your fast passes on the app and see current wait times of each ride. This helped so many times when we were sure what we wanted to hit next. 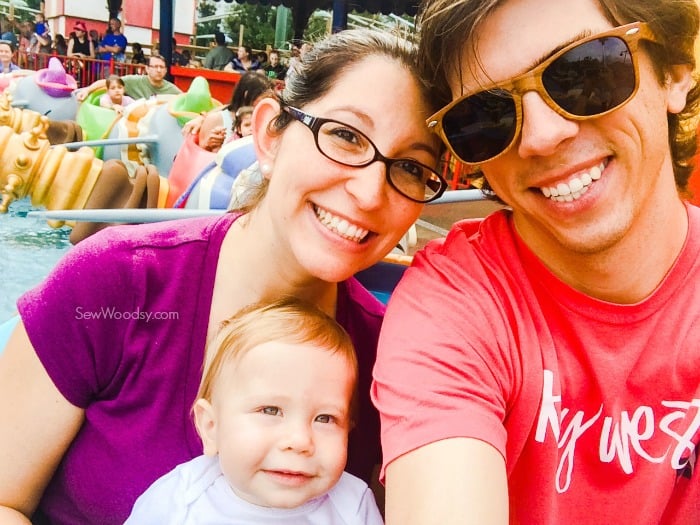 3. Do your “must ride” rides first – you never know how small children will be after a few hours at the parks. So to ensure you get to do what you really want to take them on definitely hit it first. I say get the fast passes for these rides, but if for some reason you can’t… then head to these first.

4. Get to the park right when it opens – if your child is anything like mine he’s up at the crack of dawn. No excuses to not get to the park when it first opens. When we were visiting (end of February) it was very very busy. Some rides had waits in upwards of 110 minutes. By getting to the park early we were able to hit a few rides first thing in the morning with any where from 5-15 minute waits. I also suggest doing the character meet and greets first thing in the morning in Fantasyland. You’ll have way less of a line. 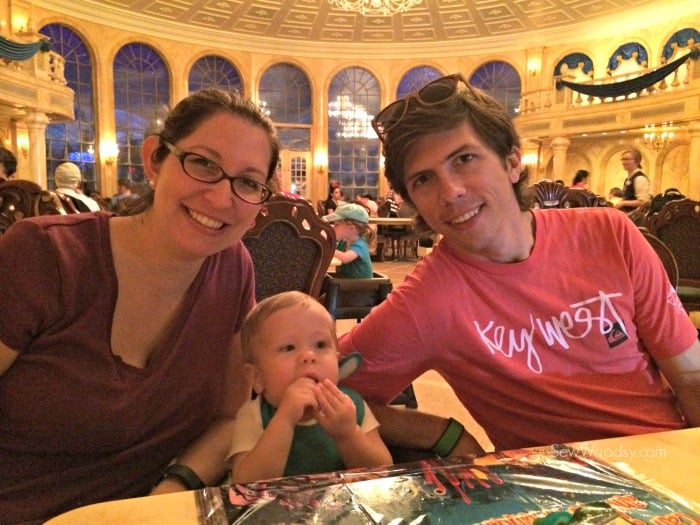 5. Pack snacks – we packed everything but the kitchen sink for Ryder. We had a variety of snacks (Annie’s Bunnies, Veggie Straws, and Cheerio’s) plus a few pouches on hand + chooMee spout adapter, and because Ryder is still new to eating solid foods I packed my own little container of diced chicken, quinoa, and vegetables for him. I also don’t get any where without my Table Topper (it’s the plastic placemat thing in the picture). Pack water, juice, milk — they allow it and you’ll save money! Our friends who came with us on the last day have a 1.5 year old and they brought her the same snacks plus a sandwich. 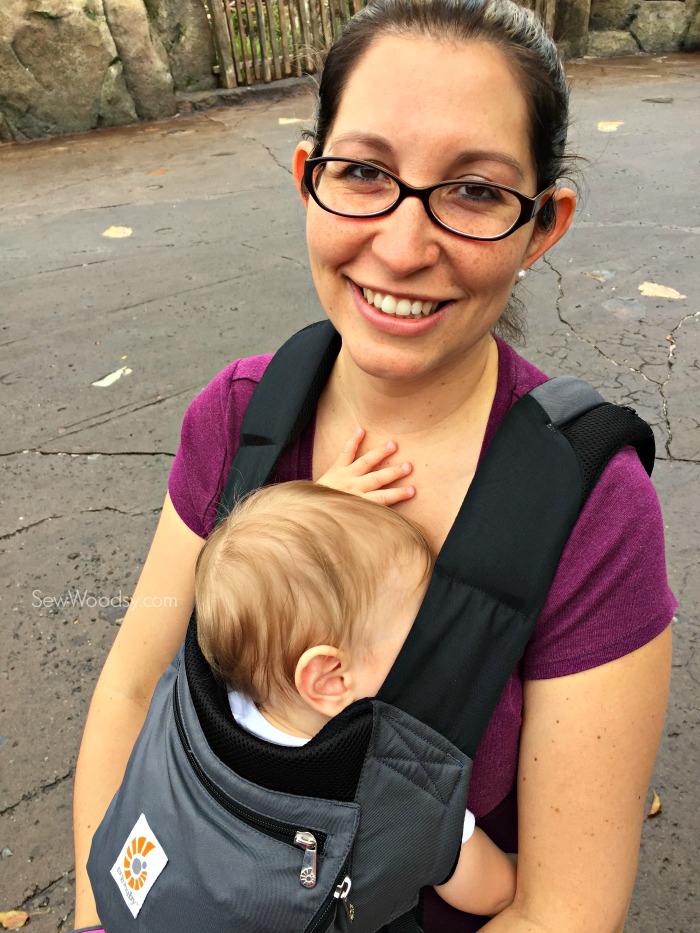 6. Baby wear if you can – baby wearing is not for everyone but if you’ve done it a handful of times I highly suggest to do it in the parks. We had our stroller but as we hopped from ride to ride instead of carrying him in our arms we baby wore and it worked out beautifully. As soon as we would get ready to board the ride, Jon would unsnap the Ergo and we were off to ride the ride. As soon as we were done with the ride I would put him in back in the Ergo. I left the ergo snapped around my waste the whole time. This is also how I breastfed Ryder in the park without having to stop and sit — I could feed him on the go and he also took his naps this way.

7. Parent Ride Swap – if you want to ride a ride that your small child can’t ride. You can always do the parent swap program! The only downfall is that you’ll ride by yourself, but the upside–at least you’ll get to ride it!

8. Do not leave valuables in your stroller – this goes without being said, but I felt that I still needed to address this. You can’t have your strollers in the lines as you wait to ride rides so make sure that you don’t leave any valuables with your stroller. Bring a book bag and pack strategically. 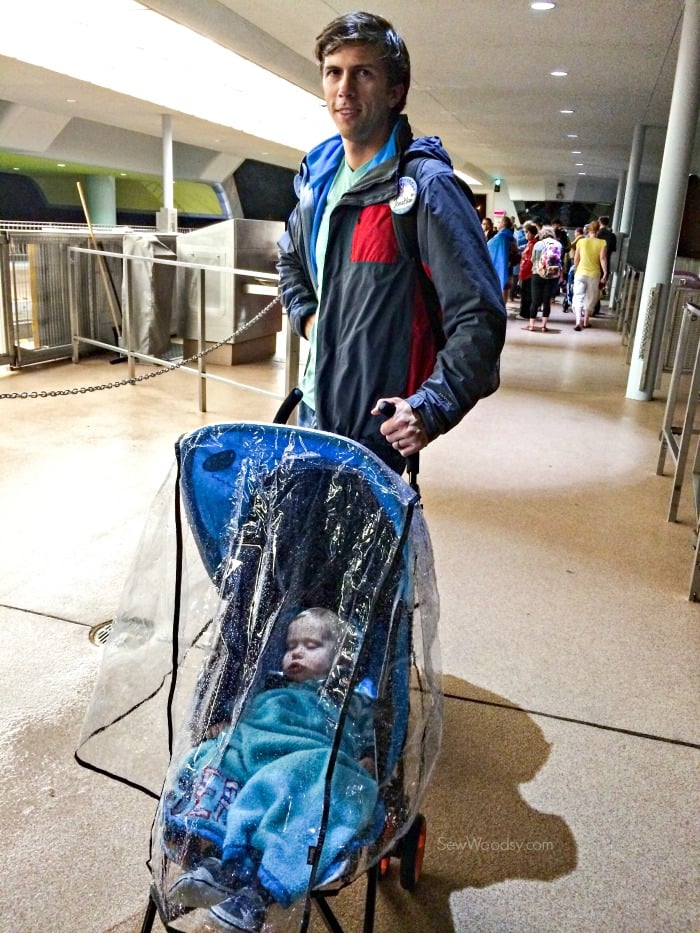 9. Pack rain gear – Florida weather can be very very unpredictable. Pack rain gear for the entire family. You can buy rain ponchos for .99 at Walmart. We also brought a stroller rain cover. It came in handy as a wind blocker the one day when it was  cold and windy and the next day when it was pouring down raining. Ryder never once got wet!

10. Remember to have fun – that’s what Disney is all about. Things might no go as you planned. Naps might be missed or severly delayed. Just go with the flow and have fun.

I hope you found these tips for Walt Disney World’s Magic Kingdom helpful. If you’ve been to the Magic Kingdom with a small child and have other tips please feel free to leave a comment below!

Disclaimer: There are affiliate links in this post. This was not a sponsored post for Walt Disney World–just our own experience we wanted to share. As always all opinions are my own.