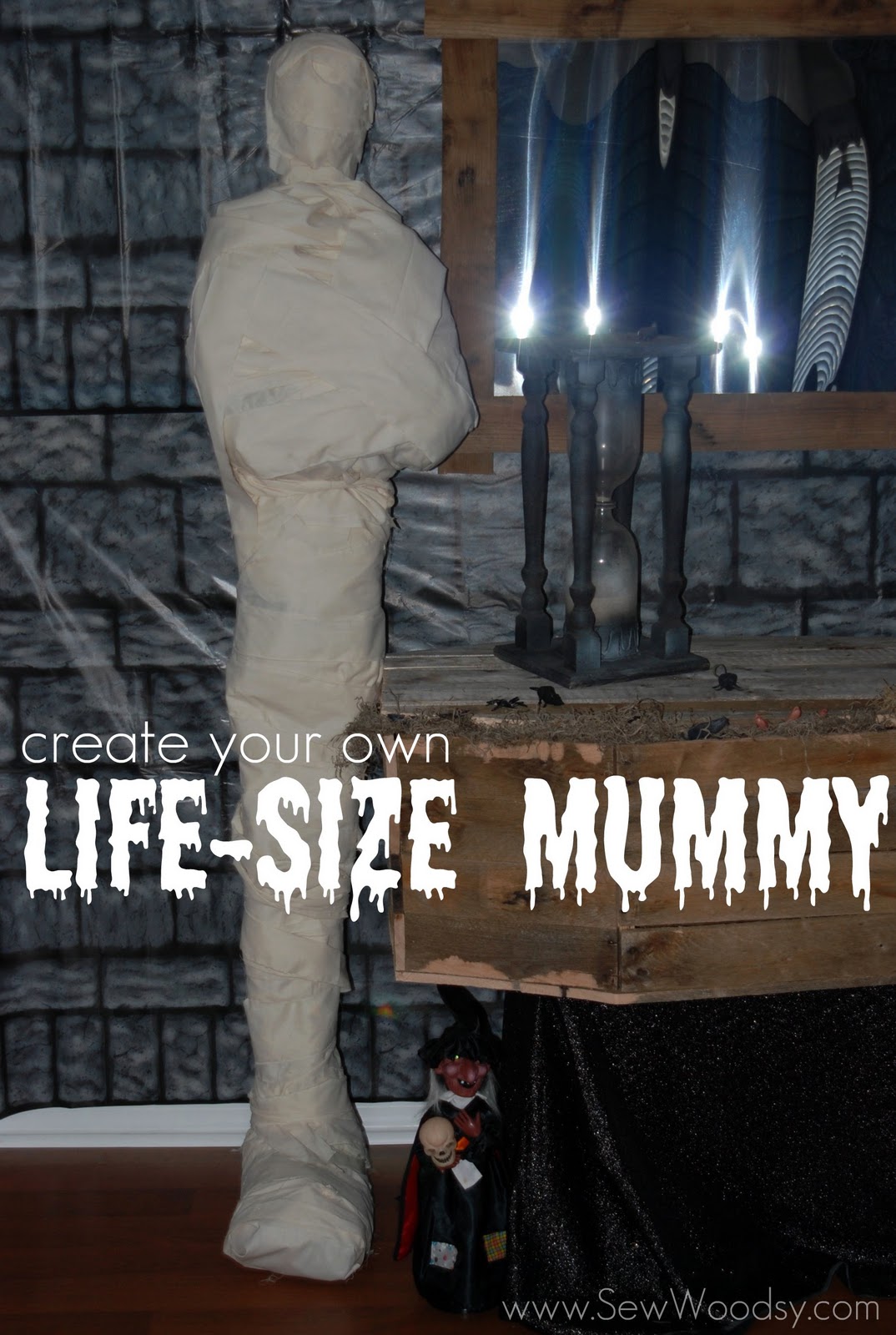 I dreamed up this project last year literally days before our Halloween Costume Party. I instantly started creating my life-size mummy, and finished it with hours to spare before our party.
Supplies:
5+ yards beige muslin
A month’s worth of newspaper
Water bottles & plastic bags
Styro-foam head
Packaging Tape & Scissors
Glue Gun and an infinite number of hot glue sticks
scrap piece of wood 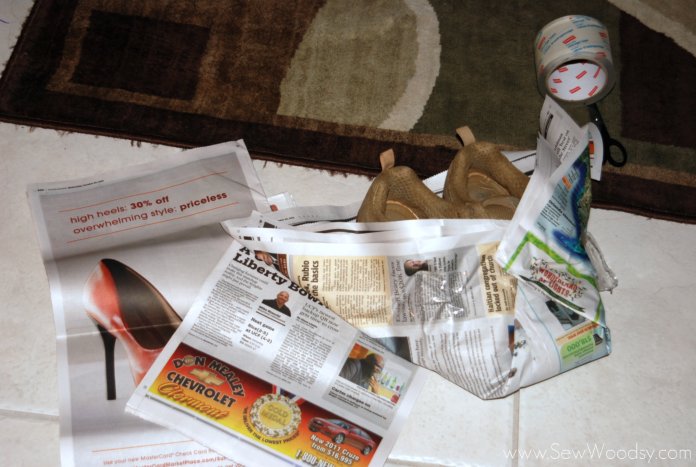 Since I wanted the mummy to be life-size I took a pair of Mr. Woodsy’s shoes and used that as my template to create the feet. Because he wanted to be able to wear his shoes I then removed the shoes from the taped template and replaced them with water bottles. 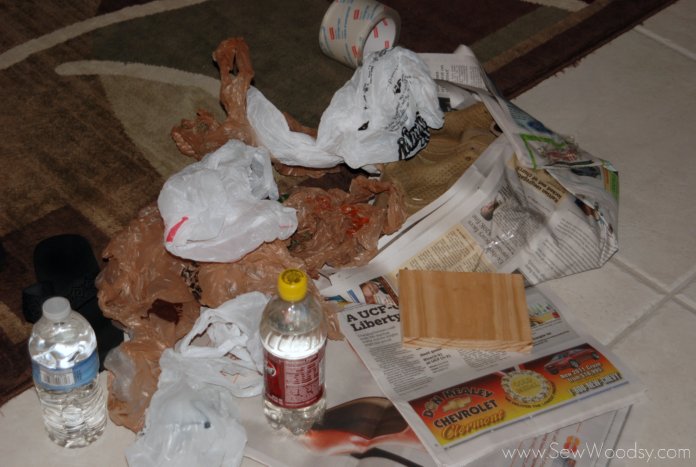 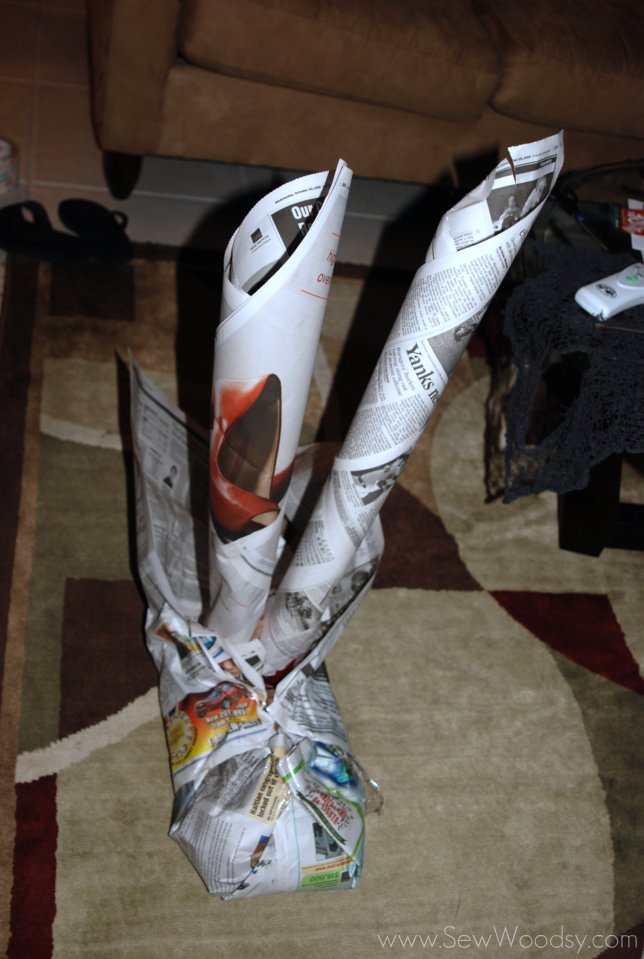 Next, I began creating the legs. I simple rolled a few sheets of newspapers to start with, then worked around the “legs”stuffing them with newspaper and making them look a bit wider. 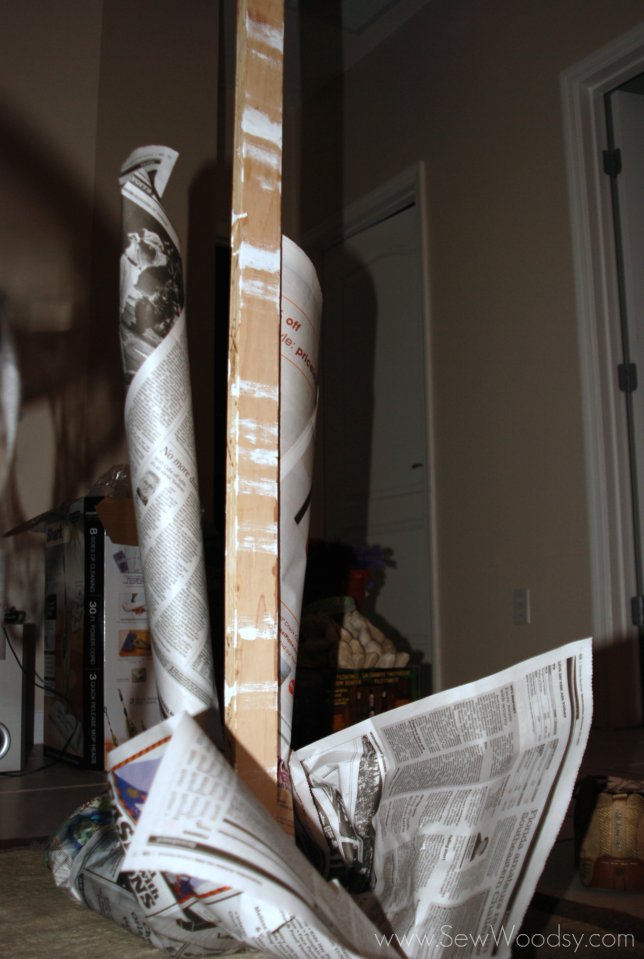 I used a long scrap piece of wood as the main support for the mummy (as pictured above). 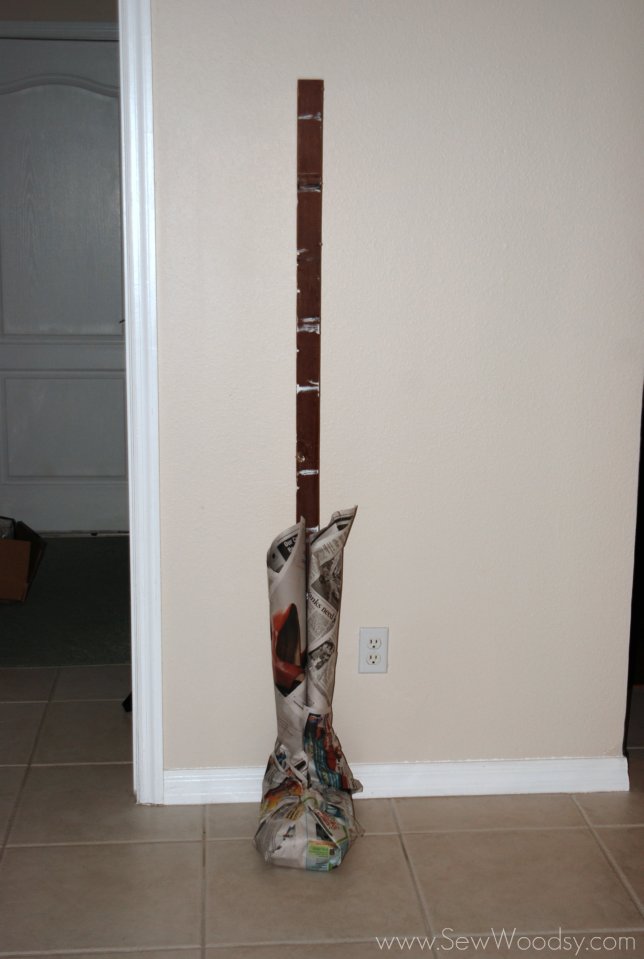 I wrapped the remainder portion of feet to the legs around the scrap wood and secured it with tape. 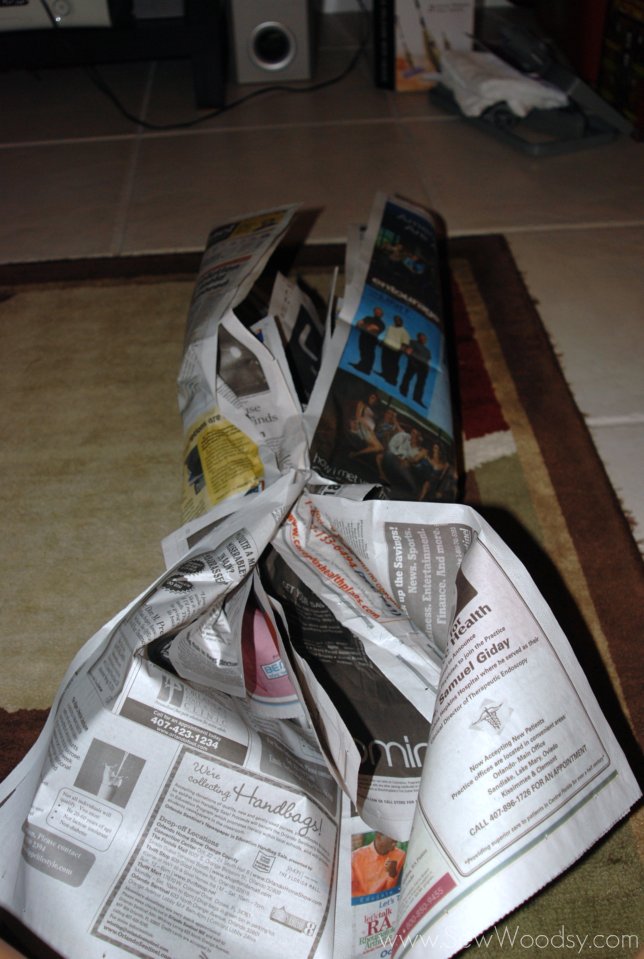 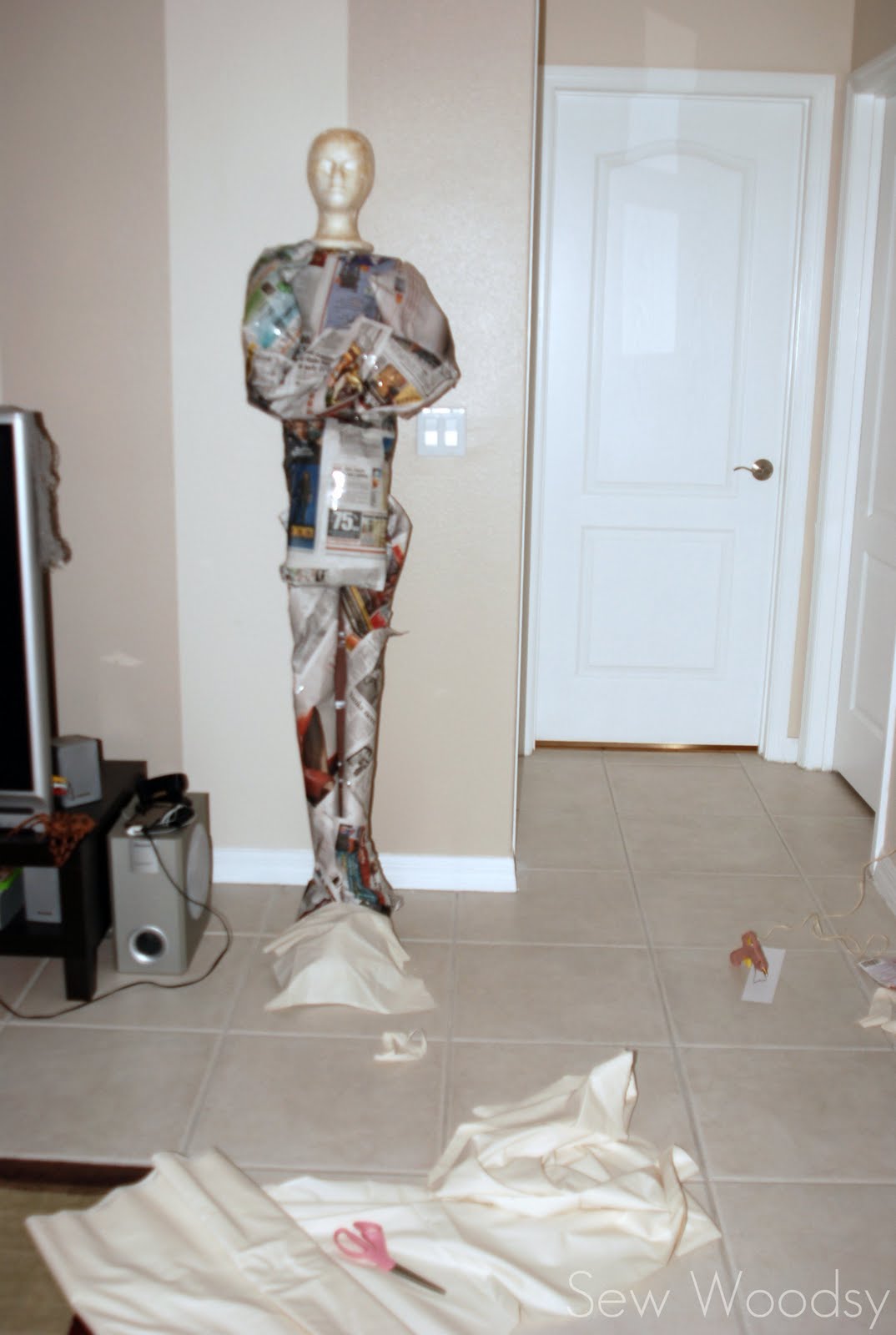 Next, you will begin adding the muslin. This process probably took me easily 2 hours. Get ready for a bit of a mess and an infinite number of hot glue sticks used! I started at the bottom of the mummy. I took a large strip of muslin and covered the feet; then added additional strips to the feet. 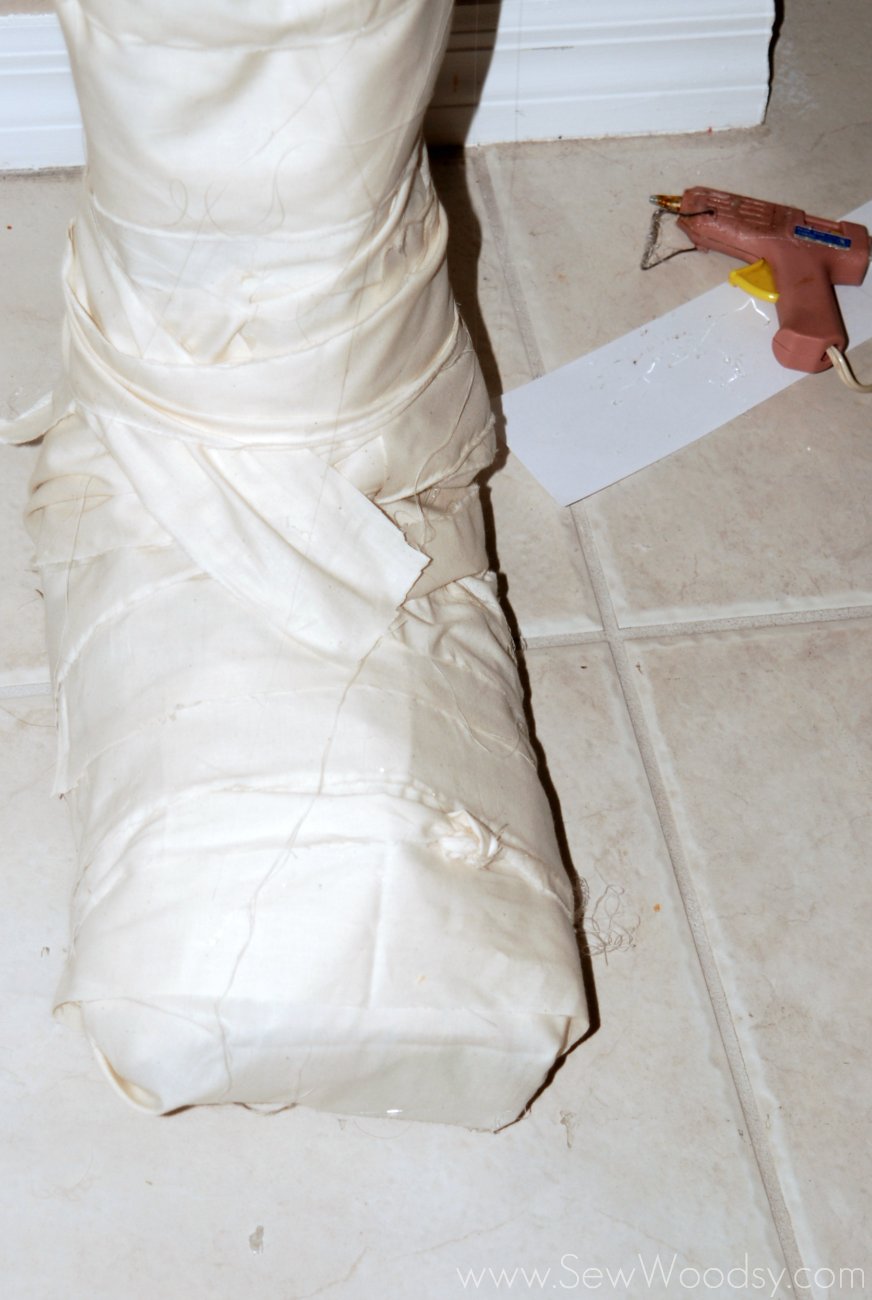 I cut one-to-two inch strips from the muslin; tearing the rest. I applied a generous amount of hot glue on each strip and then placed it loosely on the mummy. Be careful the glue is hot, and will most likely seep through the cloth. 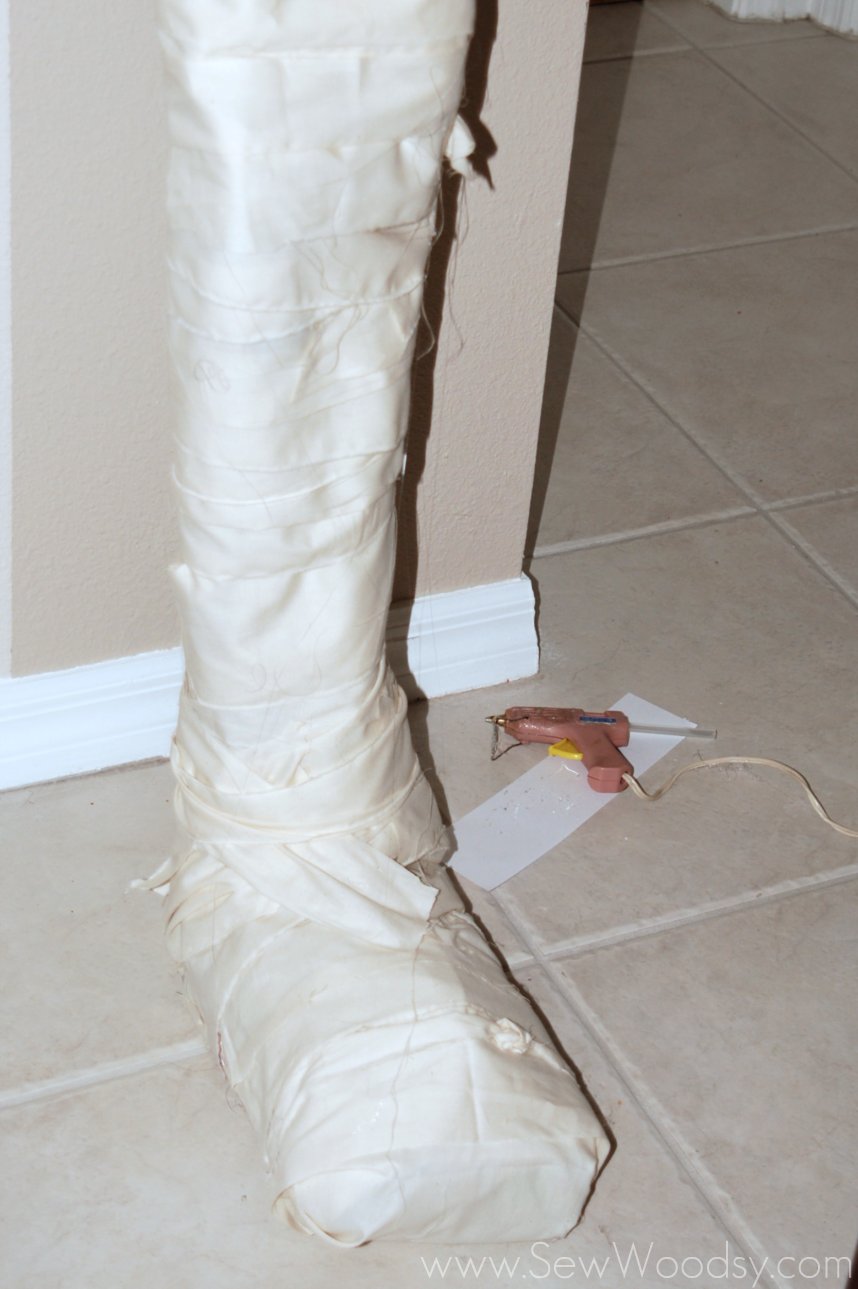 Repeat… the step above until you no longer see newspaper and are satisfied with the look of the mummy. 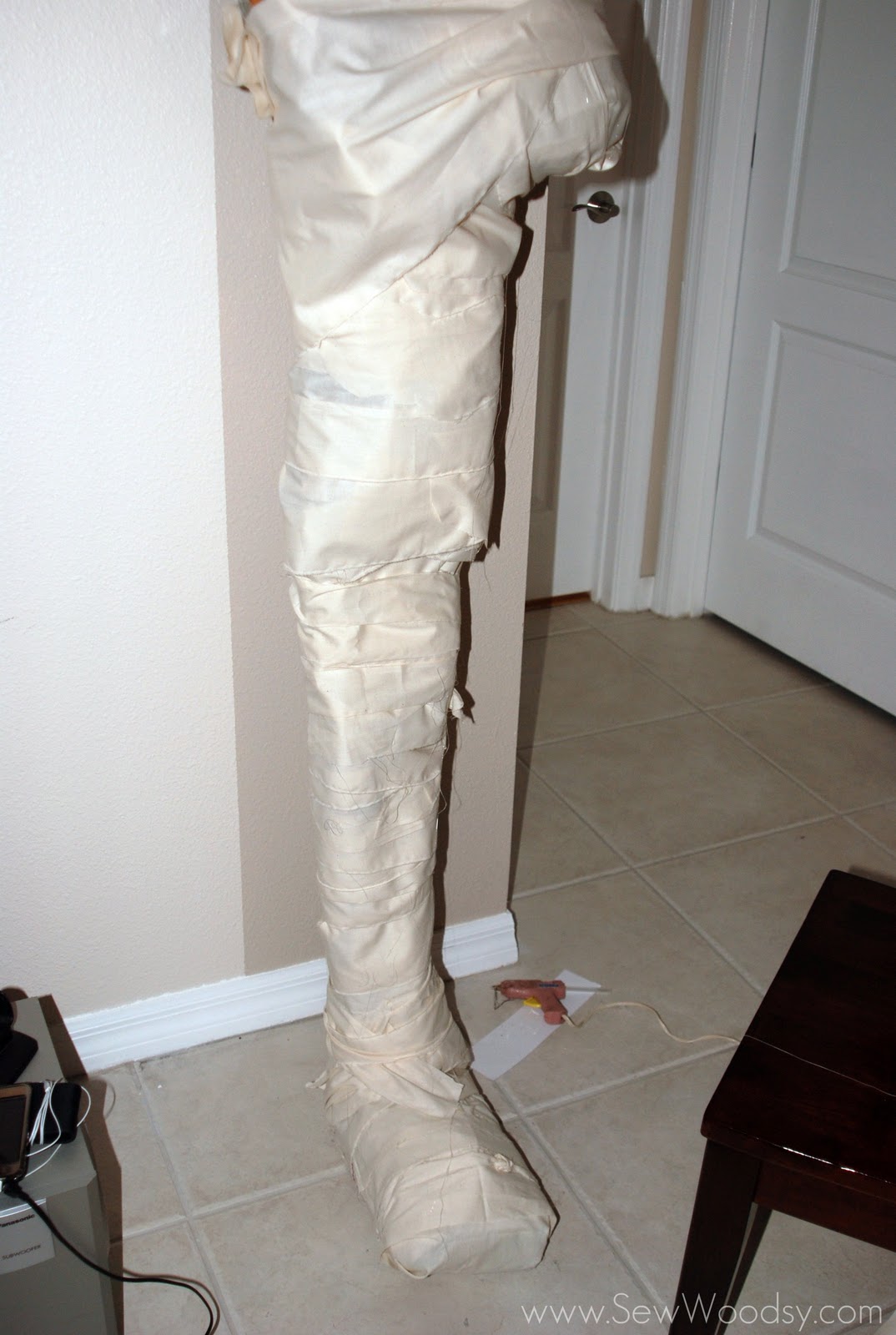 After a few hours… this is what you should have! Beware of the hot glue… I suffered a sever hot glue burn from this project… probably around the time I took this photo. It left a scar on my ring finger (I’ll spare showing you the photo–it’s gruesome)! 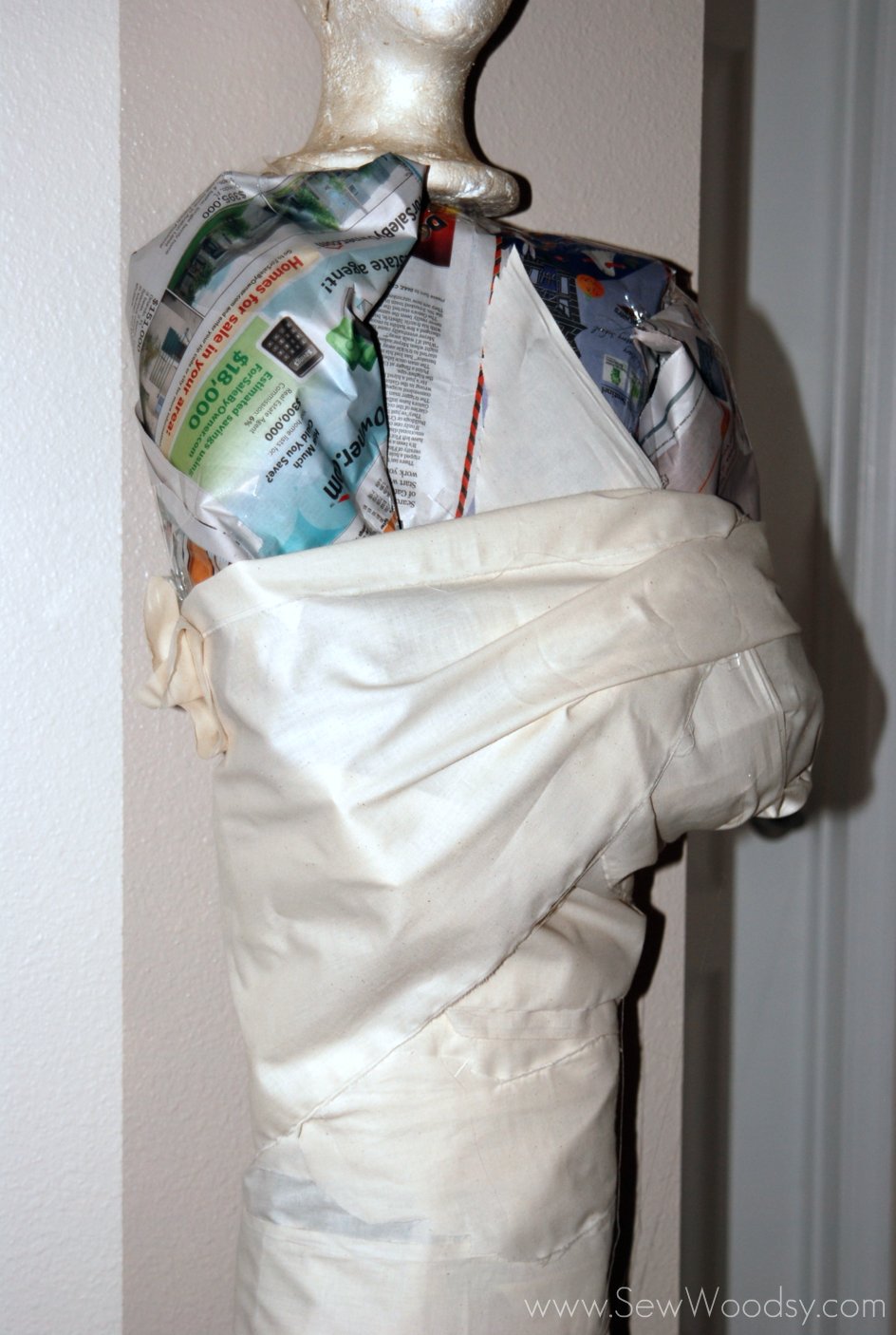 I tried making the arms looser and you’ll noticed I used a thick strip to cover the arms. Keep on covering your mummy with muslin until it looks like a mummy and not one ounce of newspaper can be seen. 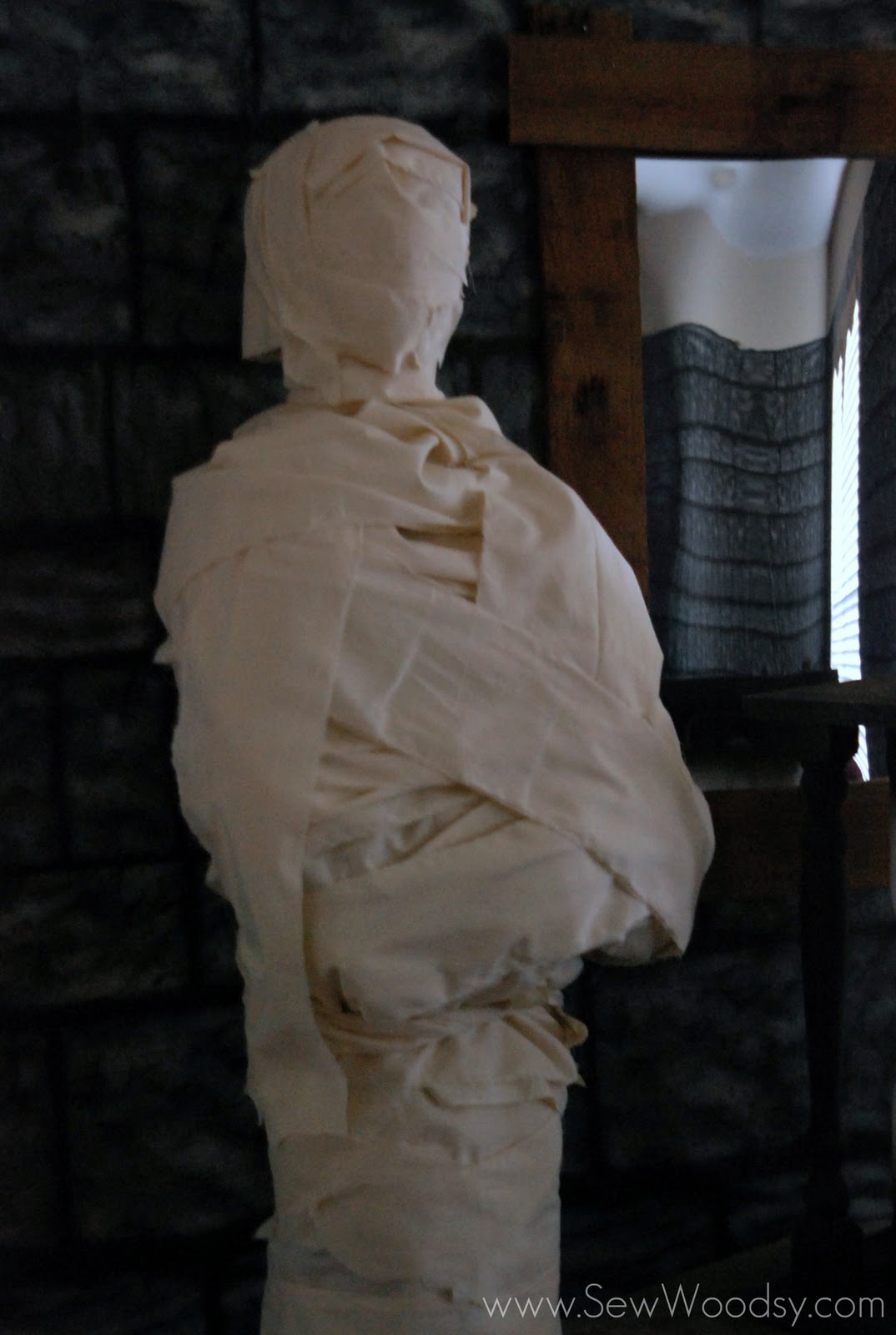 After hours of heartache and hot glue gun burns… your mummy should look (something) like this. 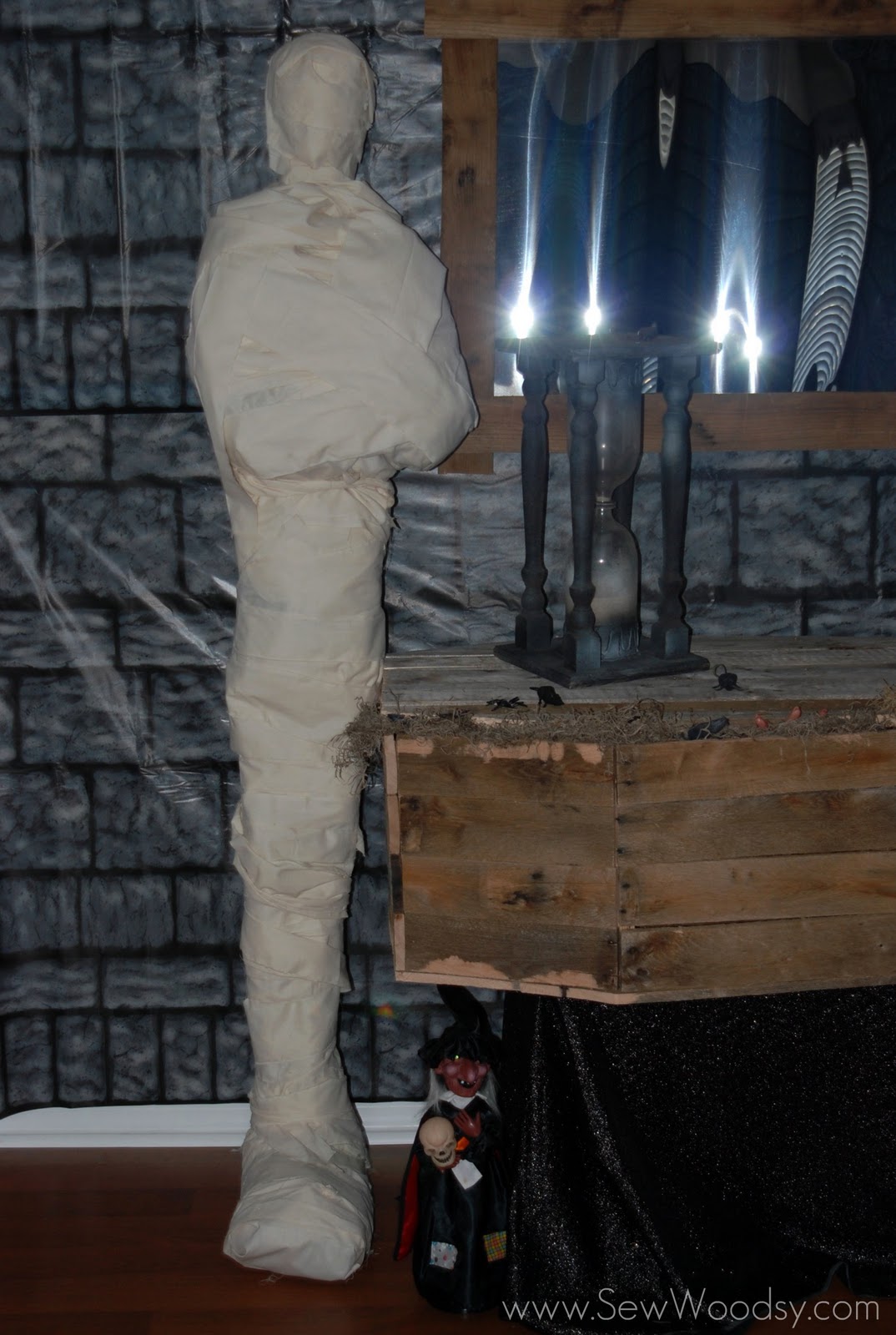 With a stone scene setter in the background to set the mood we propped the mummy next to our rustic wood coffin we made last year.