I can’t believe it’s been a month already since Ryder’s 1st Birthday. Seriously, where does time go? In our typical fashion, we threw a rather large party to celebrate keeping another little human being alive for a year. The longest yet shortest year of my life! Now that I’ve survived the first year I can’t imagine my life with out Ryder. I love the current age he’s at. I love watching him learn and grow daily. He is so perfect and just completes us. Enough of my emotional babbling… I’m so excited to share his Whale 1st Birthday Party! 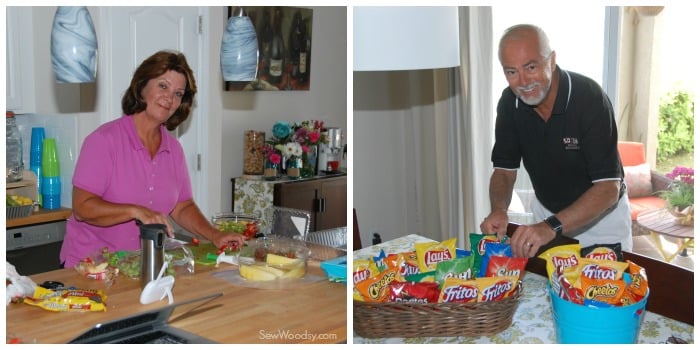 First off, before I start to show any of the details I have to take a moment to thank my in-laws again for helping out. They showed up to our house over an hour before the party was about to start and immediately started helping finish all the last minute little details we had left! My father in-law requested his photo be taken to show that he was helping out… so here it is. In all the glory for the world to see what a great helper he and my mother in-law are!

I feel like my photos never really do justice for how awesome everything really looked and turned out. Jon and I hung the paper pom poms and lanterns close to midnight the night before the party. The next day he hung the tissue paper poms and lanterns in the tent outside. We borrowed the tent from a friend as well as table and chairs from a variety of friends. We served beer and sangria for the adults as well as lemonade and water. The beer was stationed outside by the tent. We borrowed the ball pit from a friend and brought out some of Ryder’s “larger” toys as well as his tunnel (we got that from Ikea).

We ended up ordering sandwiches from Publix. I’m so glad we decided on that. I made pasta salad and a big salad as well as hummus and pita to snack on. I also did individual bags of chips for the adults and some of the kids.

One thing I’ve noticed while attending 1st birthday parties is the lack of food for the babies. So I have a whole kids/baby area set up with turkey roll ups, veggie straws, peanut butter and jelly, diced up fruit, pouches, and juice boxes. I think it was a hit! My friend Staci also gave me some plastic straw cups and sippies for the kids to use. Those came in handy as well! 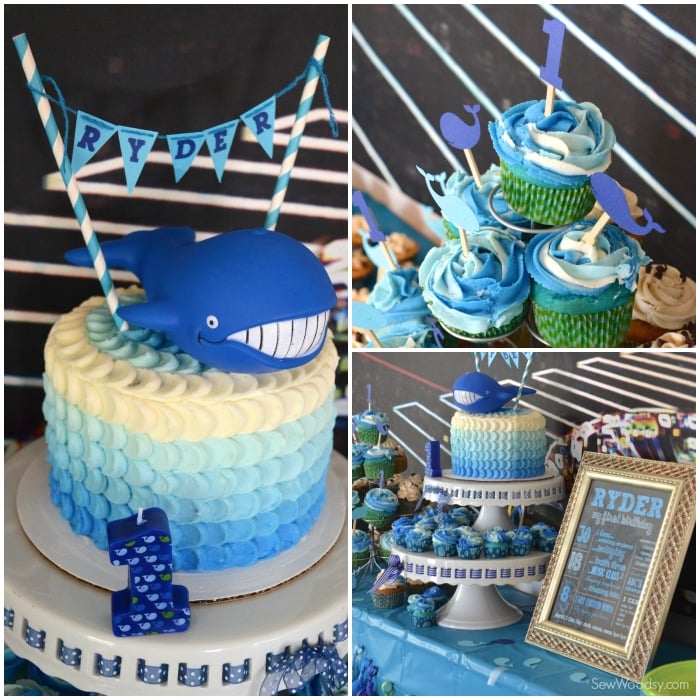 If you know me and have ever been to a party then you know I love me a dessert bar. I love to offer my guest a wide variety of desserts. We had blue velvet cupcakes as well as my personal favorite, chocolate chip cookie dough cupcakes. And we had Publix Chocolate Chip Cookies and fresh fruit. 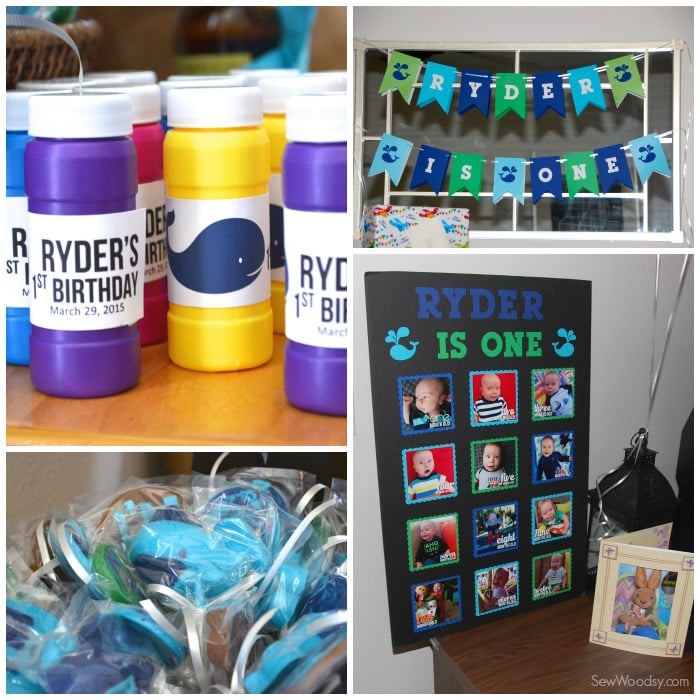 I shared the other week my DIY Birthday Bubble Favor. I also made chocolate lolly pops for the adults. Jon and I quickly put together the 12 months photo board. And I made the banner that I hung in the entrance way using my Cricut. 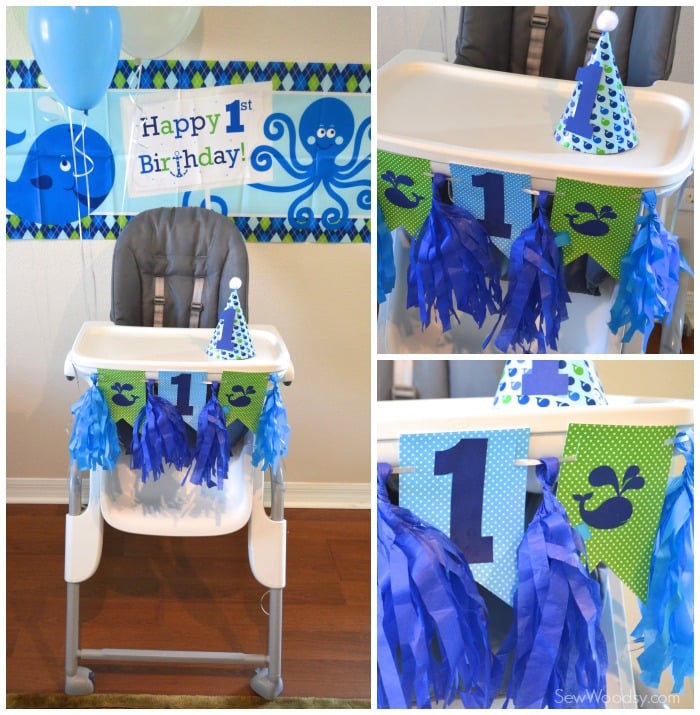 I made the tissue paper tassels and banner. I added the “1” to a store bought birthday hat and simply glued the white pom pom on top of the hat. I bought the banner, and added balloons to the high chair. All of these ideas are super simple highchair decor and inexpensive. I find buying a helium tank and then filling up balloons is more cost effective and easy for day of set-up! 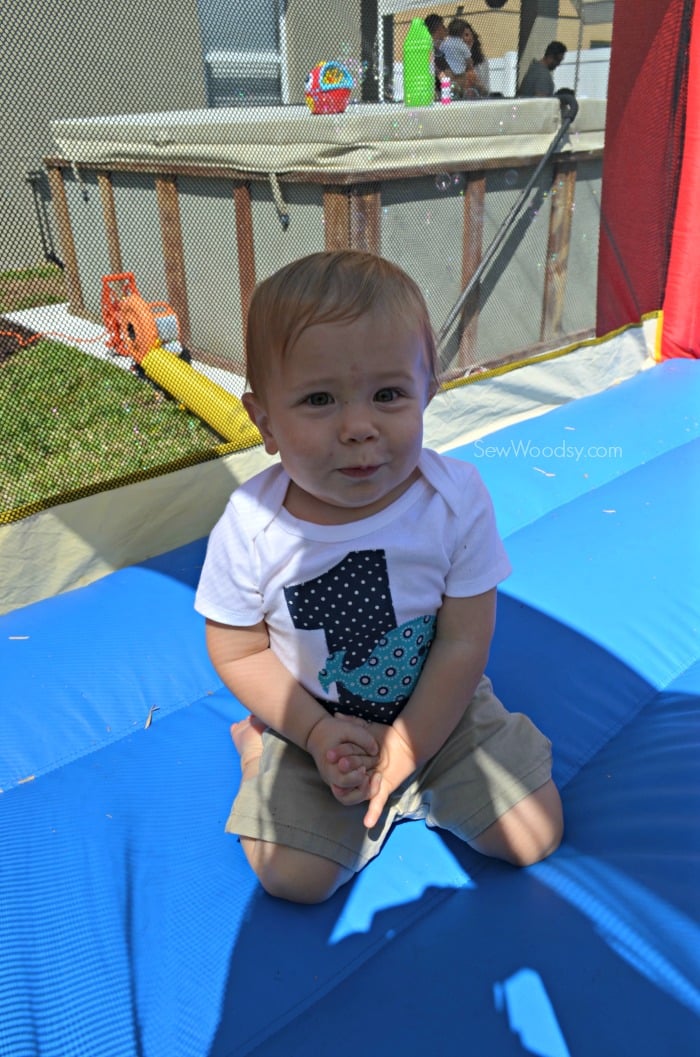 We had a bubble machine that I bought at Walmart for $10 and we found a killer deal on a Little Tikes baby bounce house on Craigslist. We bought it for $125 used. It’s practically brand new, and all the kids loved it. Babies, too! 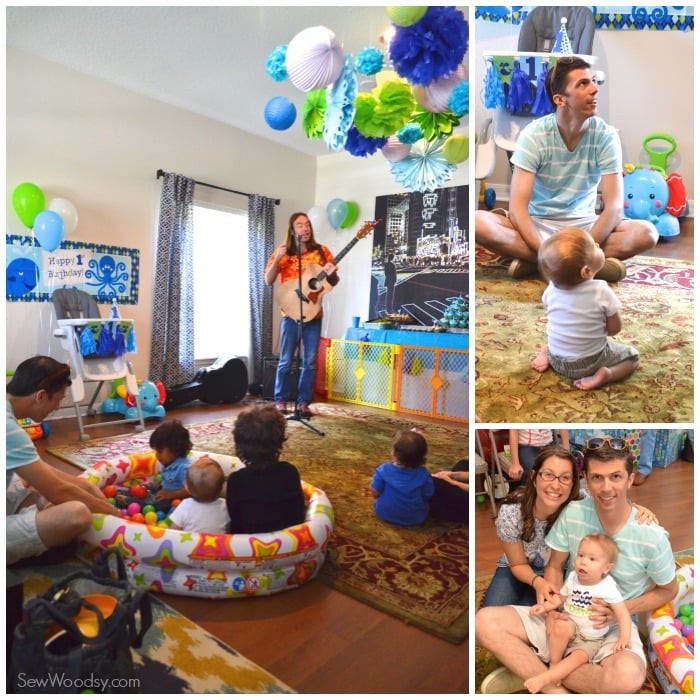 After the kids/babies ate and bounced a little it was time for Mr. Harley to perform. He’s a local children’s musician. I think the kids loved him as well as the parents! If you live in CFL and are looking for entertainment I highly suggest you book Mr. Harley! 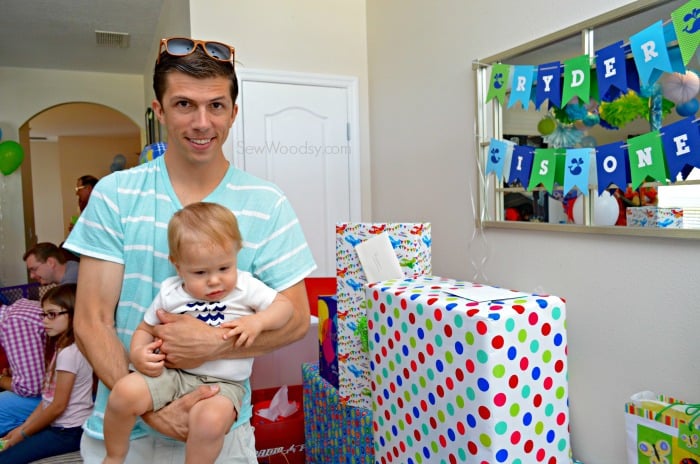 Daddy and his birthday boy! 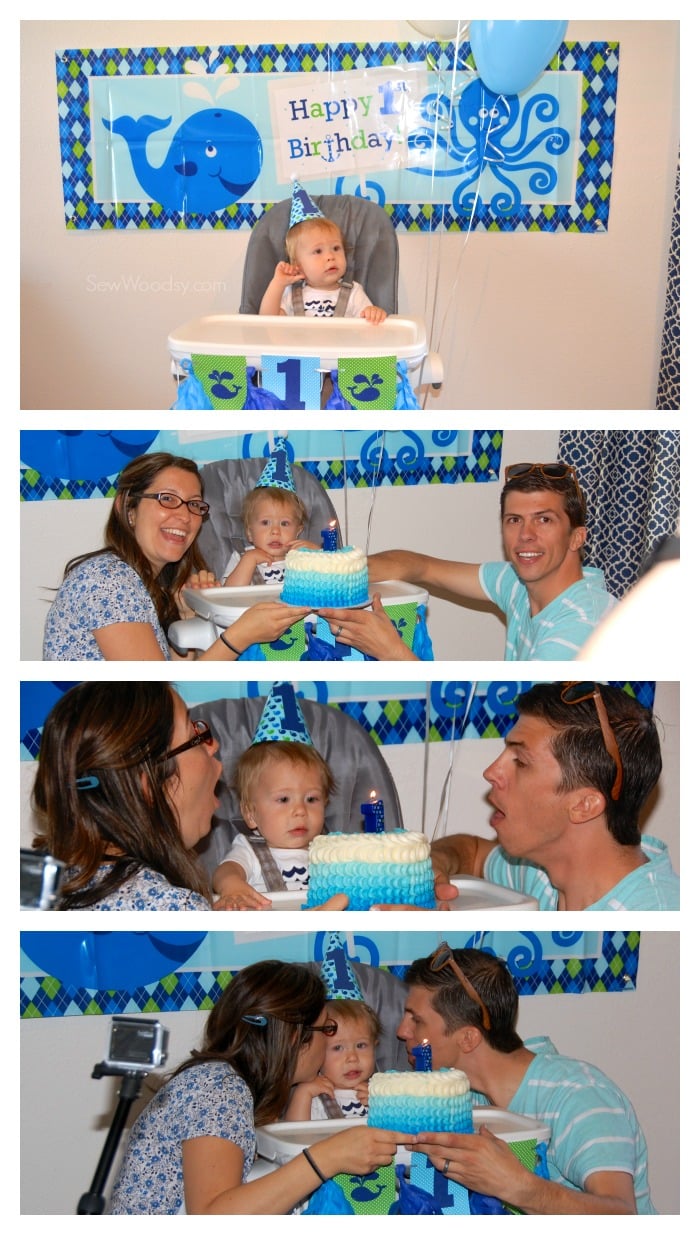 Mr. Harley added the last song with “Happy Birthday”. Since we had Ryder’s 1 year old photo’s the day before we decided to lop off half the cake that was smashed into and just give him the other half to smash. From pictures you would never know it was cut in half! I love that he kept my inexpensive birthday hat on. Had I spent a lot of money or time making his hat he probably wouldn’t have worn it. 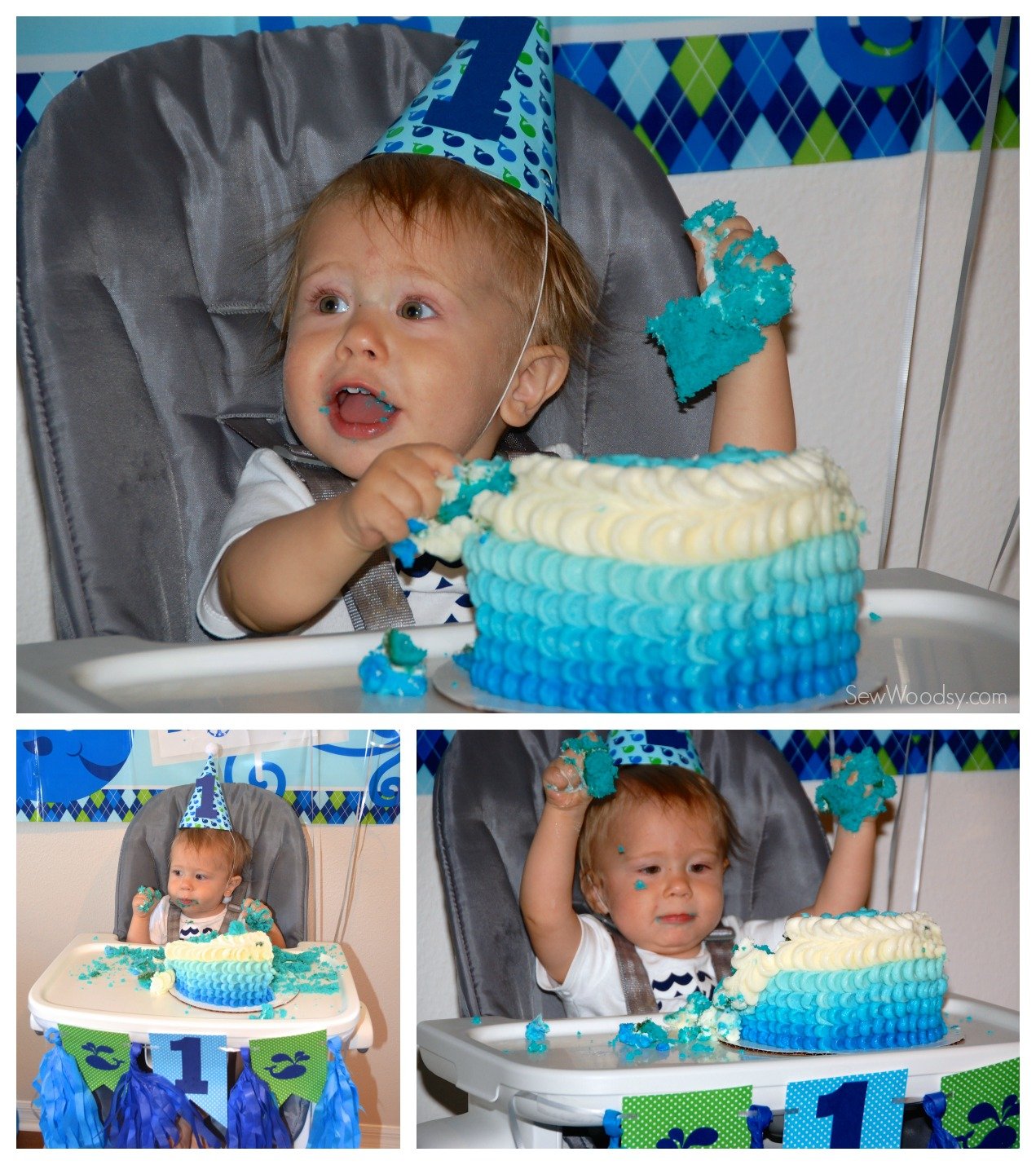 And then he smashed into that cake… like made it rain cake every where. I knew he would do a number on the cake. 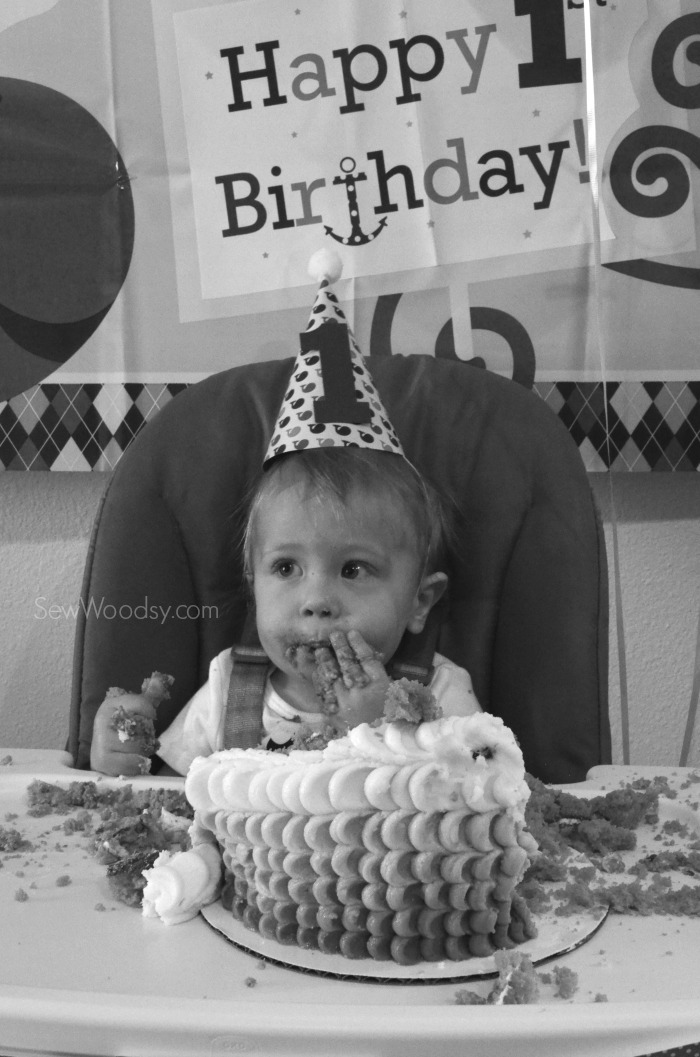 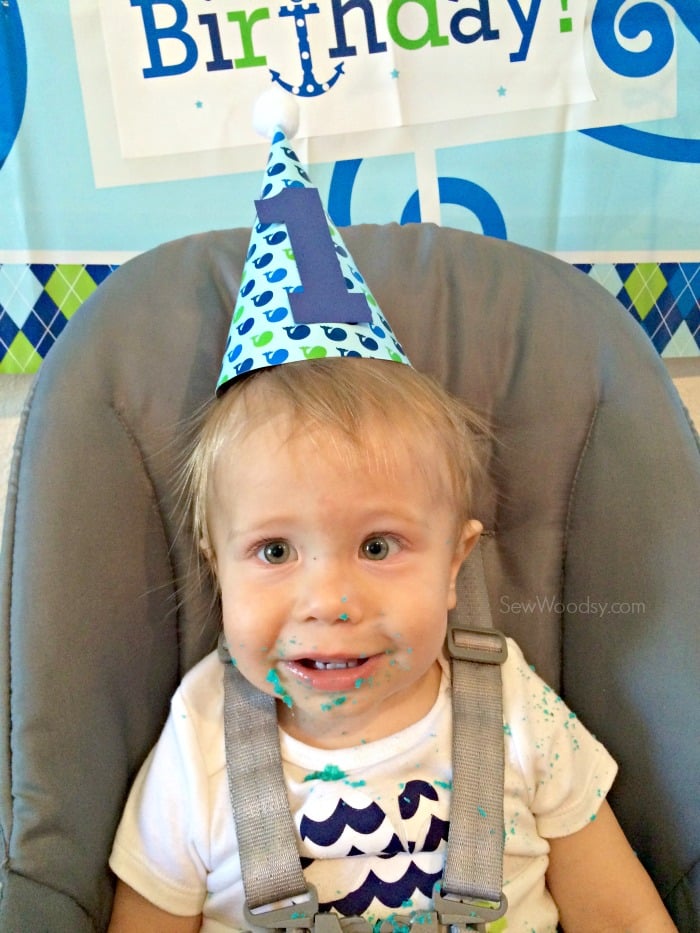 I’m so glad I grabbed my phone and snapped this photo. He was on a sugar high and I just love this photo to pieces! 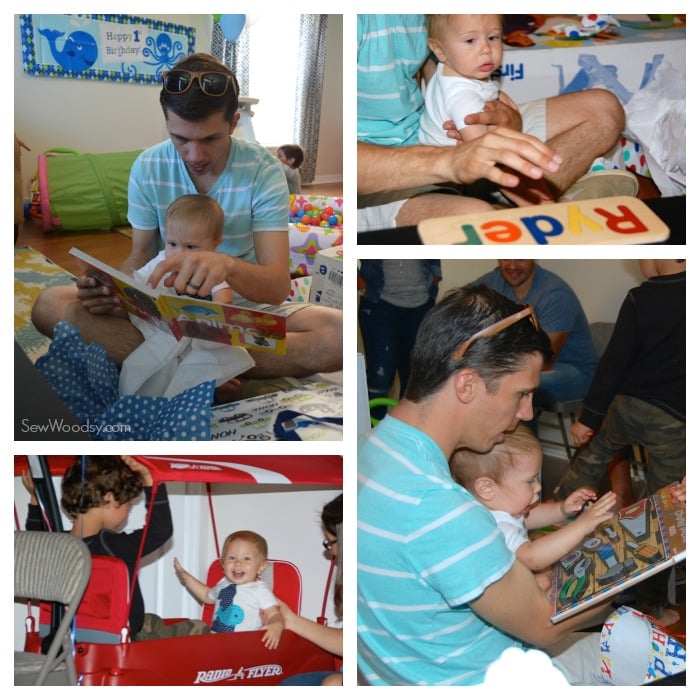 After everyone started heading out the family and a few close friends stayed behind and watched us open presents. All-in-all we had a great birthday party. And both of us including Ryder was exhausted by the end of the party. We sure do know how to throw a big party and are already resting up and planning next year’s party!