Last year, after returning home from Europe the precious was on to figure out what we were going to dress up as for our friends annual Halloween party. I created a list of 25 DIY Couples Costumes for Halloween and shared it with Jon. We narrowed it down and that’s when he decided we were gonna create DIY Lego Costumes. Jon knew if we were gonna do this we were gonna do it right. We scoured the internet and never found a complete tutorial nor could we find real life measurements. So Jon got to sketching while I tried to narrow down which LEGO I wanted to be!

These costumes took us over 40 hours to create and we spent roughly $30! Some would argue go spend the $100+ on buying a costume, but we had fun making them and it was also a race against the clock since we had one week to complete them! By far these were the coolest costumes we’ve ever created in our life! Oh, and did I mention that we might have just taken not one but two categories last year–Best Couples Costume and Funniest.

These costumes were over 7 feet tall and we looked through the mouth portion since where the eyes were was too tall for both of us! We also had a very difficult time getting into our friends house. We couldn’t go through their haunted house because we would have ripped it down and/or knocked something over and getting into their house we practically had to un-assemble our costumes. 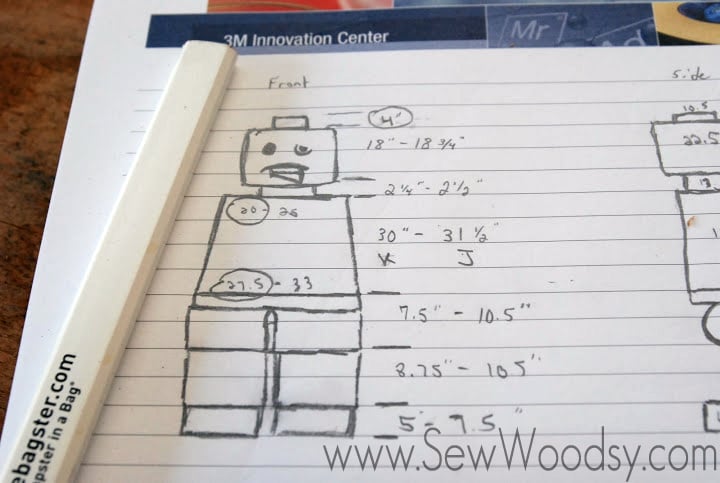 Here is the sketch up Jon created. He scaled down the sizes for both himself “J” and myself “K”. He’s 5’11 and I’m 5’1 so that is what the sizes are scaled too. Here is a rough list of supplies we used for our costumes.

First up, you need to create the base and body of the LEGO. Jon cut out this portion using cardboard. Some we found from the grocery store and others we purchased. He secured the body with black gaffers tape because its super sticky.

Then, it was time to build the feet. We built the sides out of foam and the fronts and backs out of cardboard. We found using a meat carving knife was easiest to cut the foam!

Then, make the tops of the heads. You know, the LEGO top that makes them stand out and really look like a LEGO! Because I chose a girl LEGO We also had to carve a pony tail (not shown).

Then hands were created by layering multiple pieces of foam together with the thicker purple foam. We cut “c’s” out of the hands and then began cutting the holes where we would put our actual hands through. Jon used Gorilla Glue to secure the foam together (he placed weights on top of the glued together foam over night to ensure that they stuck together. Using a meat carving knife we carefully trimmed around the hands. Little did my mom really know what her meat carving knife was being used for…

While Jon worked on the hands I worked on my maracas! I glued a few pieces of leftover foam together, freehand drew the maracas on to the foam. Carved out as much as possible of the foam using the electric carving knife and then brought my maracas over to the drill press where Jon placed a sanding pad on it. That’s how I was able to shape and get my maracas round! After they were done I painted them brown. Some would argue that they looked like chicken drum sticks, but  I knew they were maracas and made my costume complete!

We secured the foam tops and then painted them yellow and black where appropriate for mine. Jon used just cardboard pieces to hold up the tops. Make sure you get all of your cutting done first before painting. Trust me… the last thing you want is foam dust on your freshly painted costume. 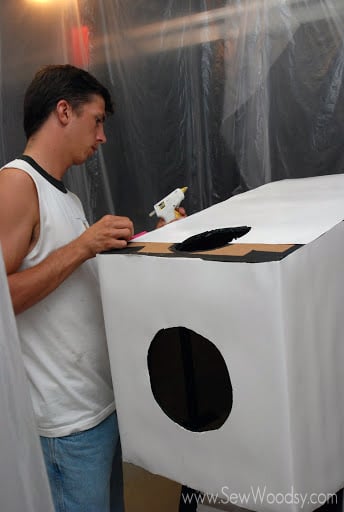 Then, we used hot glue and secured white poster board to the bodies and feet. We wanted a smooth surface and found this was the easiest way to achieve the smooth surface. You’ll noticed plastic in the background. Jon originally thought he was going to spray the costumes with our paint sprayer, but it didn’t work out. 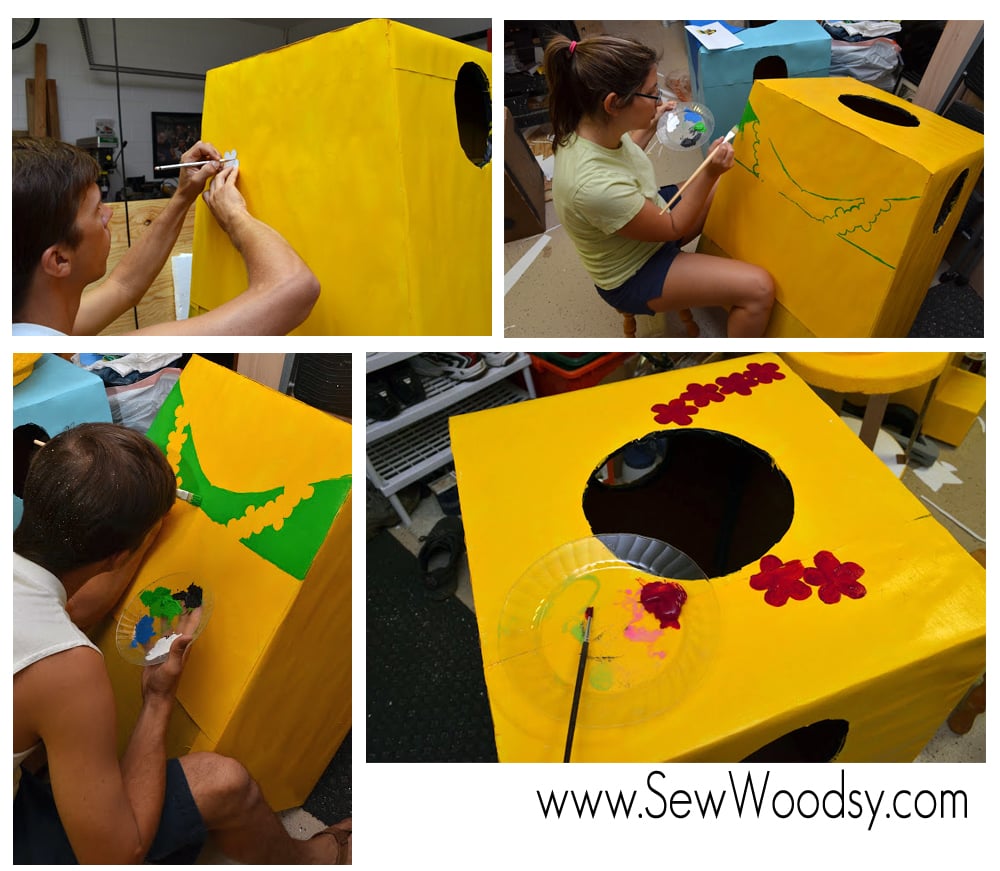 Instead we used acrylic paints we had at home. We painted the poster board yellow for mine. Jon helped me paint on the details to my flower lay. I had found a flower cut out and we used that to go with the body. Jon’s lego was much easier to paint as it was just a vest with buttons! His was mainly light blue.

Jon took on the hard task of freehand drawing the faces on to the legos. He started by securing the yellow poster board on to the lego heads. He pre-cut the mouths out before placing them on the heads and then adhered screens to the mouth. He spray painted the screens white prior to placing on the heads! Jon also made sure that the seams were in the back. He penciled on the faces and then  began painting. Jon used a black sharpie marker to draw the thinner details including the lines for the hair.

How to make a Grass Hula Skirt

While he worked on the faces I made my grass hula skirt out of a few pieces of green poster board from the dollar store. I believe 3 to be exact. I cut the skirt fringes 1-inch a part and left a few inches on the top. 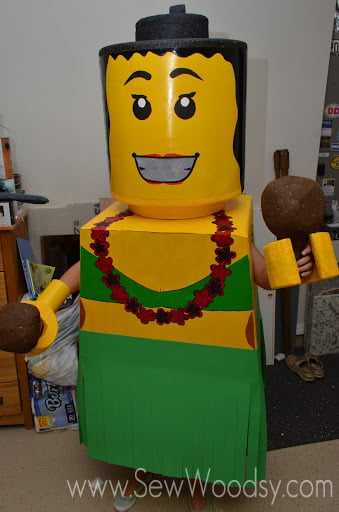 Once my costume was complete I tried it on sans the feet. It looked awesome and fit well although to be honest–cardboard is not the most comfortable thing to wear! 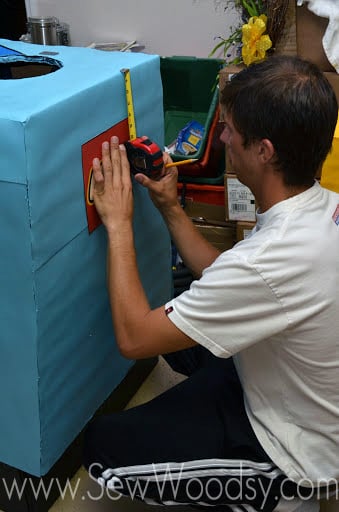 Last minute, like 20 minutes before leaving for our friends party we realized we needed to add the lego logo to the back of our legos. So we printed out the largest logo we could find and glued them on! 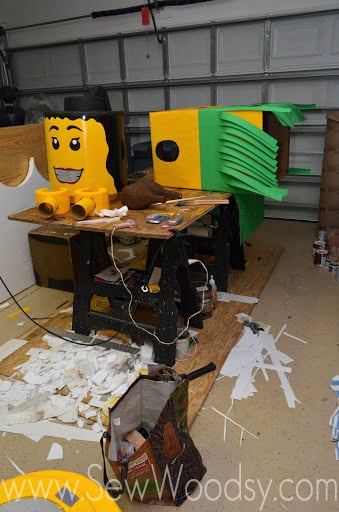 This was the aftermath! Paper and scraps everywhere… we had just a little bit of time to spare until we had to get to our friends party! 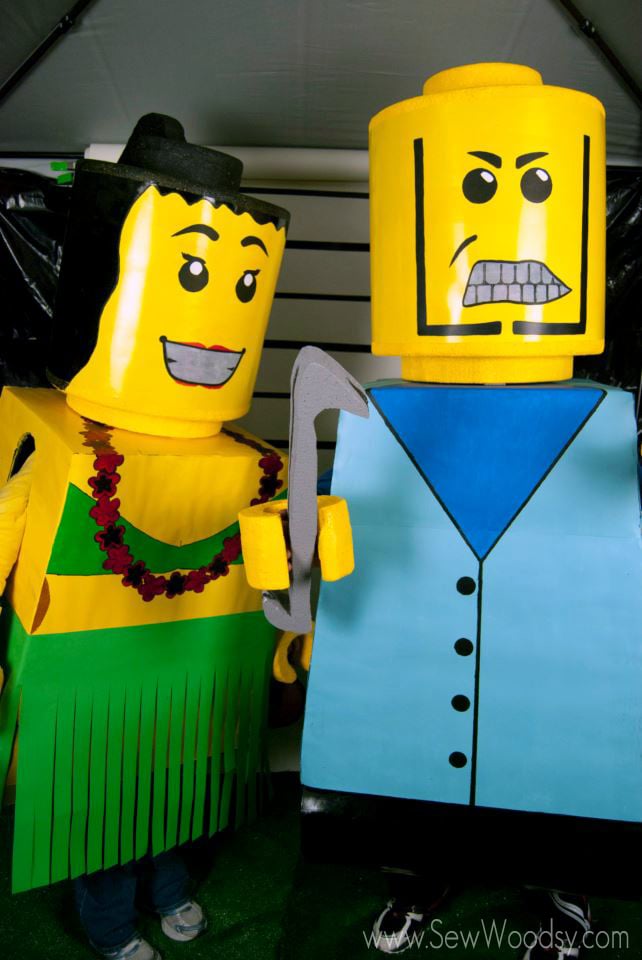 And the final product.

All of our friends were amazed and no one could tell who was inside the costumes. It took us 20+ minutes to get dressed into our costumes. Had we had extra time we could have done a test run. This photo was taken at the end of the night and at that point we decided to remove our feet. All of our final photos were taken by Christy Buonomo Photography. She also has a pretty cool blog where she mainly shares Halloween tutorials and other artsy photos she’s done, head on over and check out here blog Through My Looking Glass. 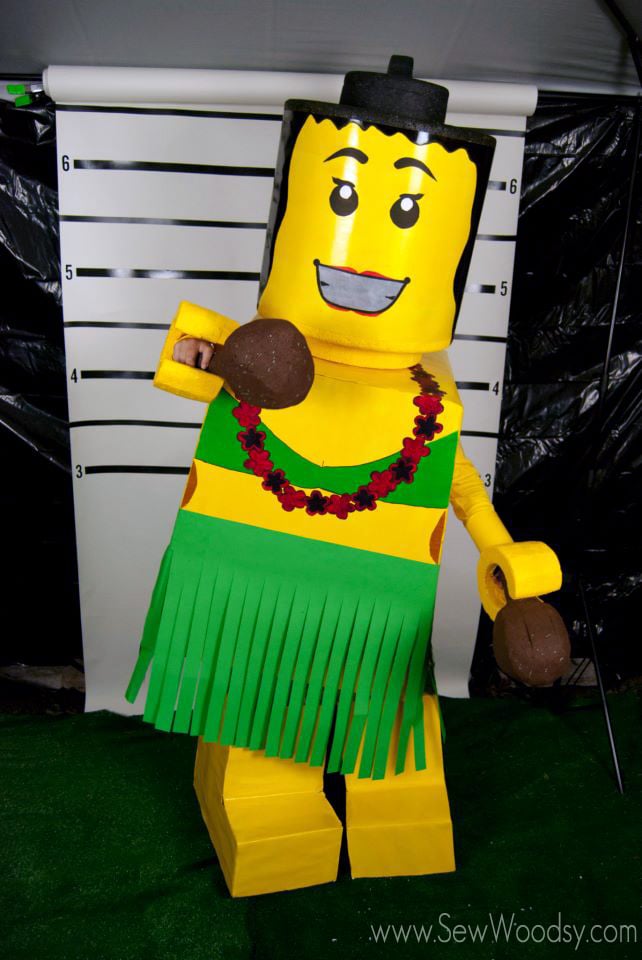 I loved how my costume turned out including my maracas. Even though everyone thought I was carrying around chicken drumsticks! I loved how my skirt actually moved!

And Jon’s costume was super scary because of that face! Our friend set up a photo booth like we were in jail. It was so difficult for us to get under the tent to take photos! 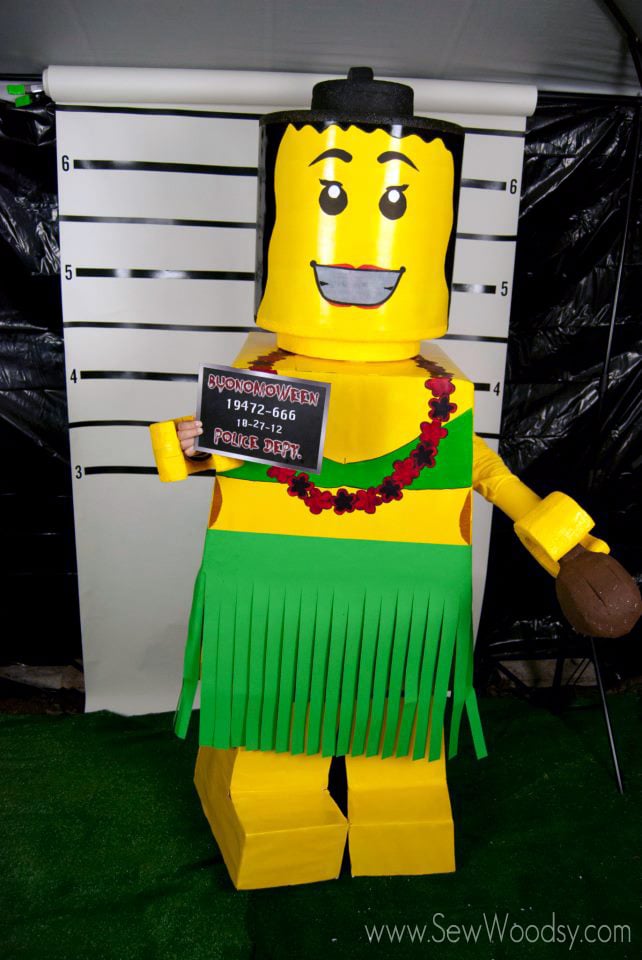 I dyed a white long sleeve shirt from Walmart with Yellow dye. It blended in perfect to the costume! Best of all I was able to wear it after Halloween! 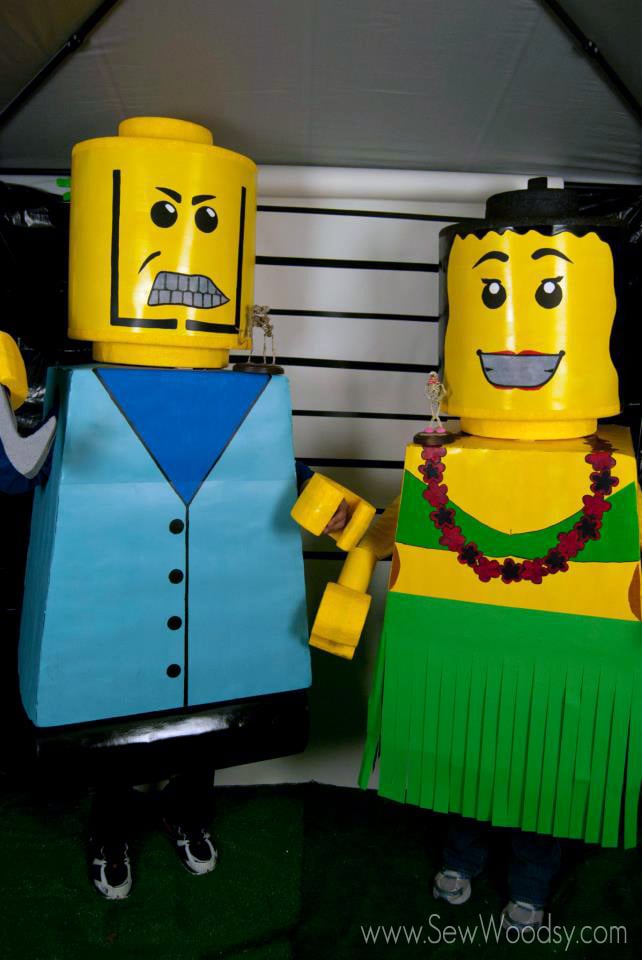 Here is both of us sans feet crammed into the tent with our trophies on our shoulders! 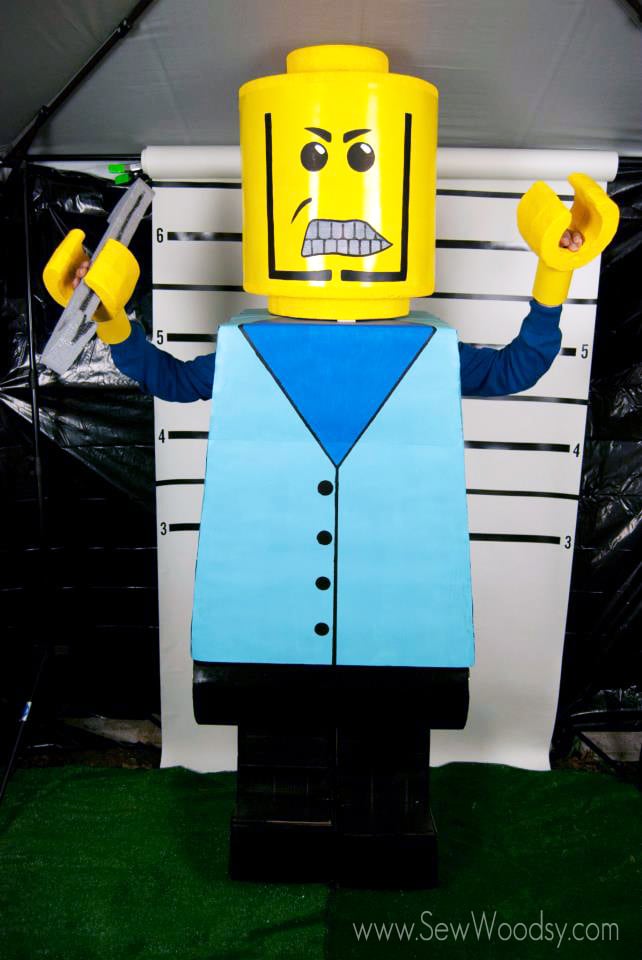 I leave you with scary LEGO face. I’m not sure if it was the face or the fact that the costume was over 7 foot tall that made it scary. On Halloween night as we passed out candy to the kids Jon dressed up in his lego costume and stood at the foot of the driveway. He made kids SCREAM… and cry. And some may have thrown their princess wands on the ground and ran away. Who would have thought a 7 foot tall lego that came to life would scare so many kids! Even the smarty-pants teenagers were screaming like little girls. It was hilarious to say the least.

I can honestly say, I don’t think we will ever make costumes that out top these ones. They were a labor of love and came out amazing! If you have any questions feel free to leave them in the comments below or email us.

Now, on to start brainstorming what we will be this year!

Since making these costumes and having kids we have shared our love for LEGO’s with them! If your planning a trip to Florida and want to learn all about LEGOLAND you can find more here: